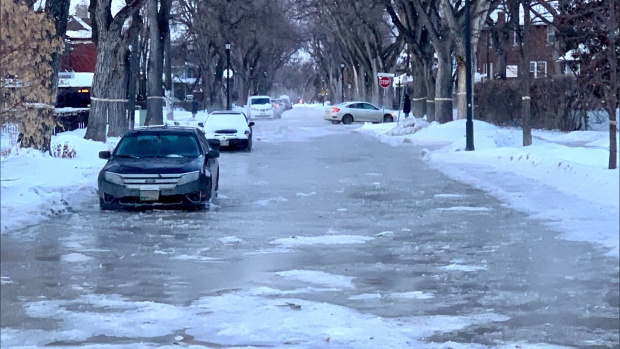 WINNIPEG — The frigid temperatures outside are causing a mess inside.

Manitoba plumbers are answering a flood of calls to fix frozen pipes, as a cold snap drags on in the province.

Pelletier said the phone has been ringing non-stop since the weekend.

“We’ve had guys going all through the night; we’re trying to help as many people as we possibly can.”

As of Tuesday night, much of Manitoba remained under an extreme cold warning. Temperatures have dipped below -30C and feel more like -40C with the wind chill.

City crews spent Tuesday trying to repair a water main that burst on Ethelbert Street in Wolseley, shutting off the taps for dozens of residents and sending icy waters gushing onto the road.

“It was a force of water. A bus came through and had to swerve,” said resident Ellen Karlinsky.

While inconvenient, it is unexpected for some in the neighbourhood.

City of Winnipeg water services manager Tim Shanks said water breaks happen throughout the year, but the cold can complicate the clean-up.

“It happens fairly randomly,” said Shanks. “Whereas, when it’s -30 out, it freezes people’s cars to the street. It makes a giant mess.”

The city said vehicle owners are responsible for moving their cars or trucks if they get stuck on the road.

While homeowners can’t prevent water main breaks, there are steps they can take to stop their pipes from freezing.

“I want to remind customers to try to insulate pipes and insulate crawl spaces,” Pelletier said.

He added, “Be prepared, get your system checked annually, so you can make sure your furnace or boiler is working. If there are insulation upgrades, you can do get them done, it’s well worth the effort.”