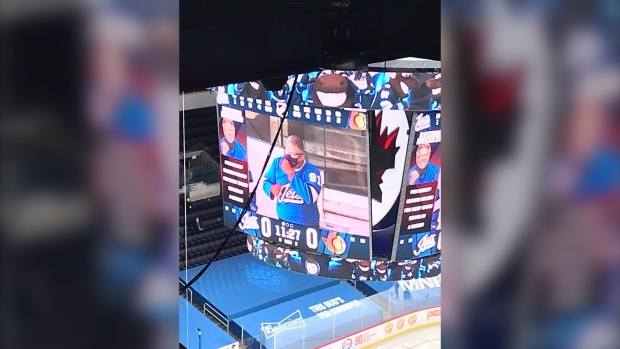 WINNIPEG — Bell MTS Place has sat empty this season as the Winnipeg Jets play its pandemic season, but that hasn’t stopped one dedicated fan from catching a game in-person.

While many things have changed during the pandemic, one thing has not: Dancing Gabe’s famous moves.

Gabriel Langlois, also known as Dancing Gabe, is an icon in the Winnipeg sporting world. Seen dancing at nearly every home game for the Winnipeg Blue Bombers, Manitoba Moose, Winnipeg Jets and the Winnipeg Goldeyes, he made his first appearance of the season at Saturday’s Jets game.

Mick E. Moose, the team’s mascot, joined Dancing Gabe in the stands, making it the largest audience the team has seen in a while.

Usually packed to the rafters, the arena hasn’t been allowed any spectators to watch hockey due to health restrictions.

The Jets ended up losing the game to the Ottawa Senators 2-1.