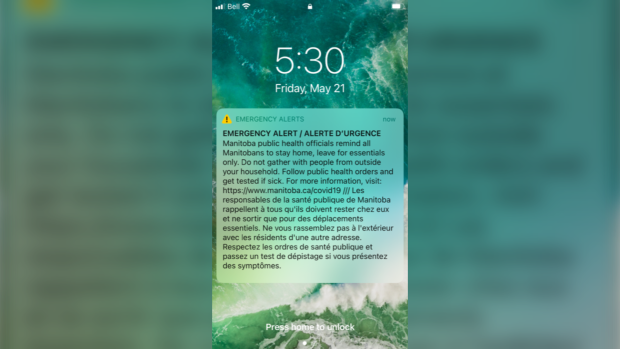 WINNIPEG — Manitobans heard the emergency alert tone on their phones and televisions Friday evening to remind them of the importance of staying at home over the Victoria Day long weekend.

The alert, released at the direction of Dr. Brent Roussin, the province’s chief provincial public health officer, was sent at 5:30 p.m.

“Manitoba public health officials remind all Manitobans to stay home, leave for essentials only,” the alert reads. Do not gather with people from outside your household. Follow public health orders and get tested if sick.”

In a statement to CTV News, a provincial spokesperson noted the province remains under a state of emergency due to the pandemic.

“Given the current state of the pandemic in Manitoba, the emergency alert system was used as an additional measure to emphasize the need for Manitobans to follow public health orders, especially over this long weekend,” the spokesperson said.

New public health restrictions banning outdoor gatherings with people from different households, and allowing only one person per household to go into a business, take effect Saturday and are in effect until May 26.