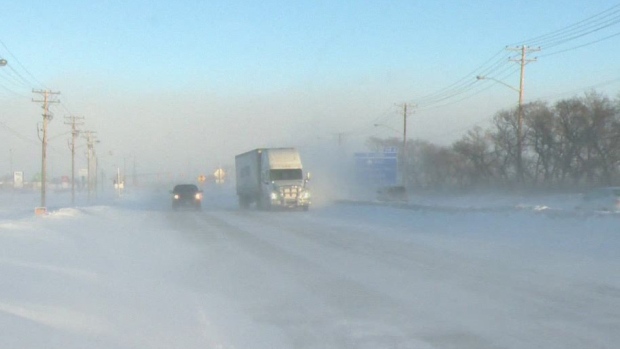 WINNIPEG — Environment Canada has issued extreme cold and blizzard warnings for parts of Manitoba on Friday.

The weather agency said it expects a period of extremely cold wind chills for parts of the province, noting the extreme cold warnings will probably expand to most of the province by the end of the day.

Environment Canada said this cold weather is due to a ridge of Arctic high pressure, which will keep skies clear, and allow for a cold air mass to move into parts of northern Manitoba, as well as Nunavut.

An extreme cold warning is in effect in the following locations:

Extremely cold weather puts everyone at risk, but particularly young children, older adults, people with chronic illnesses, people who work or exercise outside, and people who don’t have proper shelter.

Environment Canada urges Manitobans to dress warmly, to wear layers that can be removed if it gets too warm, and to wear an outer layer that is wind resistant.

Environment Canada is also warning that blizzard conditions with poor visibility and blowing snow are expected in parts of the province.

It said strong winds over northeastern Manitoba will be caused by a trough of low pressure over Hudson Bay, along with a ridge of high pressure over the Northwest Territories.

The weather agency added that northwesterly winds gusting to 70 km/h combined with the snow will create blizzard conditions, which will start tonight in York and Saturday morning in Churchill. Environment Canada has issued a blizzard warning for both these areas, noting the blizzard conditions are expected to last until late Sunday.

The weather agency said anyone who has to travel should keep others informed of their schedule and destination, and should carry an emergency kit and cellphone. Manitobans should also try and limit their outdoor activities as much as they can.

The Prairie Rose School Division announced that classes and bus services are cancelled on Friday, Feb. 5 for the St. Laurent School. Staff should come to work when the weather conditions are safe for travel.