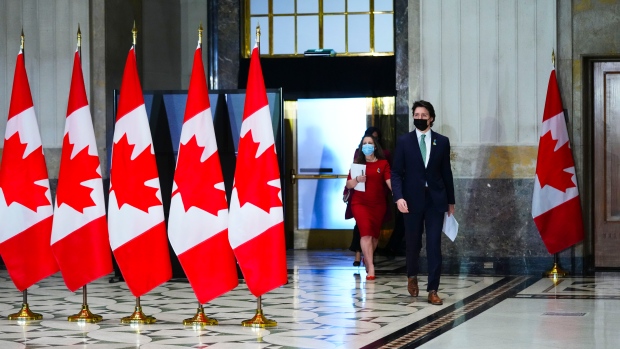 OTTAWA — Thursday’s federal budget will include a surtax on financial institutions that have made huge profits during the pandemic, CTV News has learned.

In being asked to share their wealth, the big chartered banks and major insurance companies are bracing for the new targeted measure that is expected to increase their corporate income taxes. How much more they will have to pay, is set to be detailed in the budget.

In their 2021 election platform, the Liberals vowed to slap a three per cent surtax on banks and insurers who earned more than $1 billion per year.

Moving forward “in the near term on tax changes on financial institutions who have made strong profits during the pandemic,” was cemented in the Liberal-NDP deal inked a few weeks ago, stemming from both parties’ commitments to go after pandemic profiteers.

In the last election the Liberals pledged that they would raise income taxes on the “largest, most profitable banks and insurance companies,” and bring forward a “temporary Canada Recovery Dividend” these companies would have to pay.

The Liberals estimated that the three per cent surtax would bring in approximately $1.2 billion a year, totalling $3.6 billion over the next three years.

“We have a plan for everyone. And to finance this plan, we will ask the largest banks and insurance companies to do a little more to share the dividend of their pandemic profitability with Canadians,” reads the party’s platform.

Just prior to entering into their three-year alliance, the NDP were pushing in the House of Commons for the Liberals to act on this pledge in the 2022 budget.

The NDP’s suggestion was that given the rising cost of living and wealth inequality, the billions of dollars recouped should go directly towards measures that help Canadians make ends meet.

It remains to be seen whether the revenue from the surtax will be directed into a targeted funding initiative, or added to consolidated revenue for the government to allocate at its discretion.

With the government having to factor into this budget a series of pressures—the ongoing pandemic economic rebound and inflation; promised funding for housing, climate, and health-care initiatives from the Liberal platform; pursuing elements of the confidence-and-supply agreement with the NDP; and increasing Canada’s defence spending—the budget is expected to include billions in new spending.

Just how many billions the Liberals are preparing to spend—the 2021 budget saw the government unveil $101.4B in new spending—remains to be seen.

As of the December 2021 fiscal update, the government was projecting a deficit of $58.4 billion in 2022-23, declining each year after.

However, that projection was made before the Liberal-NDP deal, promising billions for social programs such as dental care, was entered into, and prior to the renewed focus on Canada falling short of NATO’s two per cent of GDP defence spending commitment in light of the ongoing Russian attacks on Ukraine.

Pursuing revenue-generating initiatives such as the this surtax, is one way the government could be looking to pay for their long-list of spending commitments.

Though, Ernst & Young’s national tax policy leader Fred O’Riordan cautioned that while going after banks may be popular politically, the cost could get passed on to bank customers in the form of higher fees, unless the government moves to prohibit that.

“It’s sort of consistent with the kind of virtue-signaling taxes that the current government seems to favour,” O’Riordan told CTV News. “It’s a relatively punitive tax from the point of view of those being taxed… but that amount of money pales in comparison to the likely deficit.”

While readying for the policy to be implemented, banks have been pushing behind the scenes for the government to change course.

In an address to shareholders at the bank’s annual general meeting on Tuesday, Scotiabank CEO Brian Porter called the “bank tax” a “knee-jerk reaction,” according to his prepared remarks.

“Not only is the bank tax a knee-jerk reaction that sends the wrong message to the global investment community… it is ultimately a tax on you, our shareholders – approximately 70 per cent of whom are Canadian. It’s a tax on those who directly own our shares or participate through pension plans or mutual funds, index funds or ETFs [exchange-traded funds],” reads a copy of his address.

The Liberal platform also promised a series of other tax fairness initiatives that could further inject billions into federal coffers, if pursued in this budget.

As the government looks to increase revenue to help pay for all they’ve promised, former parliamentary budget officer and current president of the University of Ottawa’s Institute of Fiscal Studies and Democracy Kevin Page told CTV News that they may feel justified in targeting the banking and insurance sectors given they “basically went through the recession in 2020-21 unscarred.”

“If you’re looking for revenues, and you’re looking to do new things to help strengthen the post-COVID economy, it’s certainly a sector that stood out, that did very well, that could probably withstand a tax increase,” Page said.

The experts CTV News spoke with said this coming surtax may be the start of a new trend, opening up the potential for the federal government to pursue future tax increases on lucrative sectors.

The NDP have said that they want to see profitable oil companies and big-box stores also be subjected to a corporate tax increase, and it’s something Singh told reporters on Tuesday that he’ll keep pushing for.

Freeland will be tabling the budget at 4 p.m. EST on Thursday in the House of Commons.

(1767)
$9.45 (as of May 25, 2022 11:27 GMT -05:00 - More infoProduct prices and availability are accurate as of the date/time indicated and are subject to change. Any price and availability information displayed on [relevant Amazon Site(s), as applicable] at the time of purchase will apply to the purchase of this product.)

(79044)
$12.29 (as of May 25, 2022 11:27 GMT -05:00 - More infoProduct prices and availability are accurate as of the date/time indicated and are subject to change. Any price and availability information displayed on [relevant Amazon Site(s), as applicable] at the time of purchase will apply to the purchase of this product.)

(3633)
$10.95 (as of May 25, 2022 11:27 GMT -05:00 - More infoProduct prices and availability are accurate as of the date/time indicated and are subject to change. Any price and availability information displayed on [relevant Amazon Site(s), as applicable] at the time of purchase will apply to the purchase of this product.)

Things We Never Got Over

(33746)
$4.99 (as of May 25, 2022 11:27 GMT -05:00 - More infoProduct prices and availability are accurate as of the date/time indicated and are subject to change. Any price and availability information displayed on [relevant Amazon Site(s), as applicable] at the time of purchase will apply to the purchase of this product.)

(52)
$165.92 (as of May 25, 2022 11:27 GMT -05:00 - More infoProduct prices and availability are accurate as of the date/time indicated and are subject to change. Any price and availability information displayed on [relevant Amazon Site(s), as applicable] at the time of purchase will apply to the purchase of this product.)