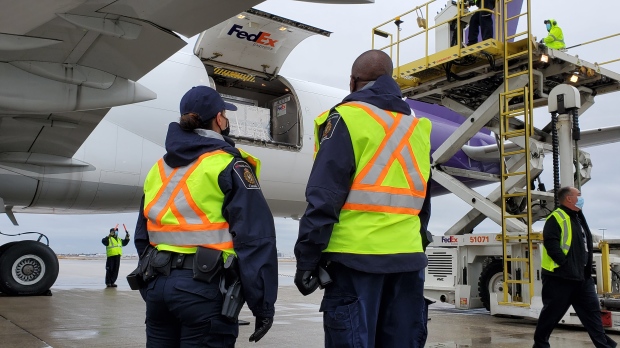 TORONTO — The first shipments of Moderna’s COVID-19 vaccine have arrived in Canada, a little over 24 hours after it was approved for use in this country.

In a tweet Thursday, Prime Minister Justin Trudeau shared an image of the vaccine doses arriving in Toronto from Paris. The vaccines were transported aboard a FedEx aircraft as part of the postal carrier’s deal with the federal government.

They were transported using dry ice and temperature-monitoring devices to ensure the doses stayed at a cool -20 C – the temperature needed to keep the vaccines stable.

In the tweet, Trudeau stated the doses are part of the 168,000 Moderna vaccines that are expected to arrive in Canada by the end of the year. Canada has guaranteed 40 million total doses of the Moderna vaccine.

Health Canada approved the Moderna vaccine for use on Wednesday. It’s the second COVID-19 vaccine to be approved for use in Canada, with Pfizer-BioNTech’s vaccine being the first.

A limited supply of the Pfizer vaccine has already been distributed and used in every province in Canada. It is expected that the territories will receive more than the per capita percentage of Moderna vaccines since officials made the decision not to send the Pfizer shots to the North.

Minister of Public Services and Procurement Anita Anand, who was on hand when the Moderna doses arrived, reaffirmed that the vaccine will be the first to be distributed in Canada’s North.

With files from Jonathan Forani

The first doses of Moderna’s COVID-19 vaccine have arrived in Canada. These are part of the 168,000 doses we’ll be getting before the end of the month, and part of the 40 million doses we’re guaranteed from Moderna overall. pic.twitter.com/eKhQ6v8xSA