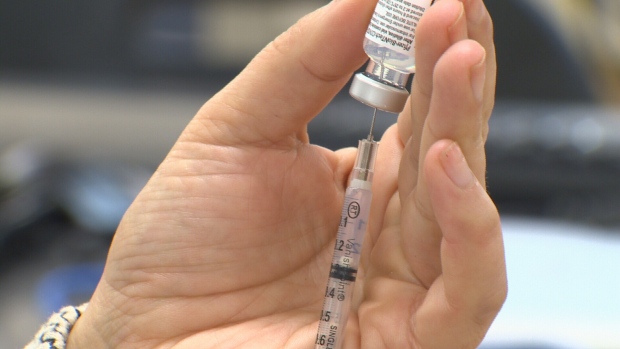 WINNIPEG — To keep COVID-19 vaccine doses from going to waste, one First Nation in Manitoba let other community members outside the province’s eligibility criteria get the shot.

That day, hundreds of doses went into the arms of people who weren’t Long Plain residents, a choice Meeches said was made to use up vaccine that might otherwise have been thrown out.

Meeches said Long Plain residents living on and off reserve were initially included in the eligible group, but uptake was low.

“It would’ve been nice to have Long Plain people but I think the expiration date is April 17 with the vaccines we received,” he said.

Meeches said to prevent doses from being wasted, the clinic was opened up to Portage la Prairie School Division staff and other local businesses.

“They’re not necessarily from Long Plain, but we were quite concerned and we did not want these vaccines to go to waste and so we allowed that.”

He said that clinic administered 253 doses, and seven were wasted.

In total, Meeches said Long Plain has 1,200 Moderna doses allocated to them by the province.

A representative from Manitoba’s First Nations Pandemic Response Coordination Team (PRCT) told CTV News opening eligibility was not ‘allowed’ or advertised as such.

“We understand that the general public became aware of a pop-up clinic for the off-reserve membership and showed up on their own,” a written statement reads. “The nurses didn’t want to turn people away so administered some doses. By the end of the day, this practice was suspended.”

The statement also said this will not be the practice moving forward and every effort will be made to follow up on second doses.

“The Integrated Vaccine Operations Center (IVOC) will continue to work with communities, federal and provincial partners to ensure adherence to provincial eligibility protocols,” the representative said.

Further to that, they explained that IVOC will move any unused doses to another community to prevent wastage. Going forward, they said, communities have the option to accept multiple smaller shipments as opposed to one large one, which will help alleviate these challenges in the future.

Meeches said they made a decision that he will live with.

“We had a line-up all the way past the gas station, halfway down the lane,” he said. “That’s how much interest there was.”

Long Plain has two more clinics planned for this week on reserve, Meeches said one is for the neighbouring Dakota Plains First Nation.

He said he’ll open clinics up again if uptake is low.

“Unless someone tries to block us from doing what we need to do, we have to open it up and we will,” he said,

“If we can’t utilize all the vaccines that have been allocated to us, why not give it to other people like the RCMP, firefighters, paramedics, the school divisions, why not the trades?”

55-YEAR-OLD WOMAN AMONG THOSE VACCINATED AFTER GETTING A TEXT

Karen Giffin get her vaccination at last Wednesday’s clinic.

The 55-year-old does not meet current eligibility requirements in Manitoba, but heard about the open clinic when someone texted her.

She said she had to go back a few times before they had a dose for her.

“I got one more call at the end of the day saying they had a few more left and to get down, so I went down and had my paperwork altogether and got in,” she said.

Giffin said she is thankful for what Long Plain did that day, because she otherwise had no clue when she could get vaccinated.

She said she thinks it’s a good idea for more clinics to use up doses this way.

MANITOBA HAS NO VACCINE WAITING LISTS

A provincial spokesperson told CTV News, as of April 6, a total of 216,718 vaccinations have been administered. From that total, 1,949 doses have been wasted – which is about 0.9 per cent.

When asked about waitlists for doses left over at the end of the day, the spokesperson said there is no waiting lists in Manitoba. The added this could be reviewed moving forward.

They said Manitoba’s wastage rate is very low and that is accomplished by careful monitoring of appointments and opening of vials.

“As the final shift near ending, vials are only opened in accordance with appointments. Each vial provides six doses and clinical leads closely monitor. However, no-show appointments at the end of the day can affect wastage.”