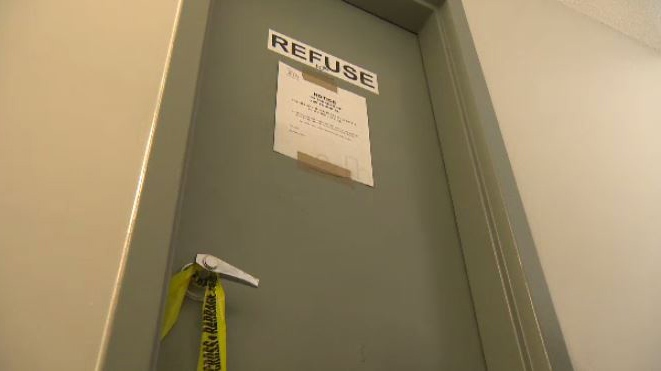 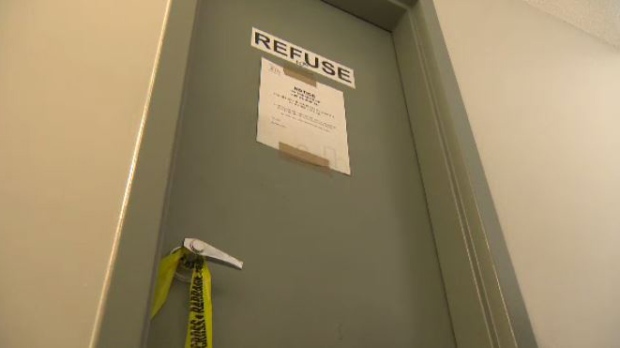 Families in a Winnipeg apartment building are on edge after a body was discovered in the building earlier this week.

The apartment is located in West Broadway and run by Manitoba Housing.

They say Winnpeg police were working in and around the apartment building before an officer knocked on Pilon’s door.

“She explained they found a man in a downstair’s garbage chute and that is a secured location … and they were investigating the garage chute all the way down,” says Pilon.

After speaking with the officer, Dromberg came over to Pilon’s place and recorded a video of police working behind the building.

The couple and other residents also say police appeared to focus their work around a garage door where garbage from the chute ends up at the back of the building.

Saturday the garbage chute remained out of order.

On the tenth floor, police tape hangs from a door handle.

Notices have been posted asking people to take trash to the outside bin.

“It is scary. No one really knows what’s going on,” says Dromberg.

Winnipeg police said in a news release Friday, they responded to a report of a body in a building in the 100 block of Young Street on Monday afternoon.

Police say when they arrived they found the body of a man.

The homicide unit is investigating and the death has been deemed suspicious in nature.

Aklilu Gebremariam lives in the building with his 2-year-old daughter and is concerned about safety.

He says police have been asking if residents had seen any strange people around at the apartment.

Another man told CTV News he was asked by police if he heard any loud noise last weekend.

University student Shatabdi Bnik said people from Manitoba Housing came by and told her the situation is under control, but she still feels uneasy.

“For me, that’s my home, but then now it’s kind of like if someone knocks, I’m like who’s knocking, it’s like an impulsive situation,” said Bnik.

A provincial spokesperson said as the matter is under police investigation, Manitoba Housing will fully cooperate with Winnipeg police to resolve the issue.

Tenants who spoke with CTV News said they’d like to know if the man who died lived in the building and hope more information is available soon.

Police have yet to confirm the exact address where the body was located.