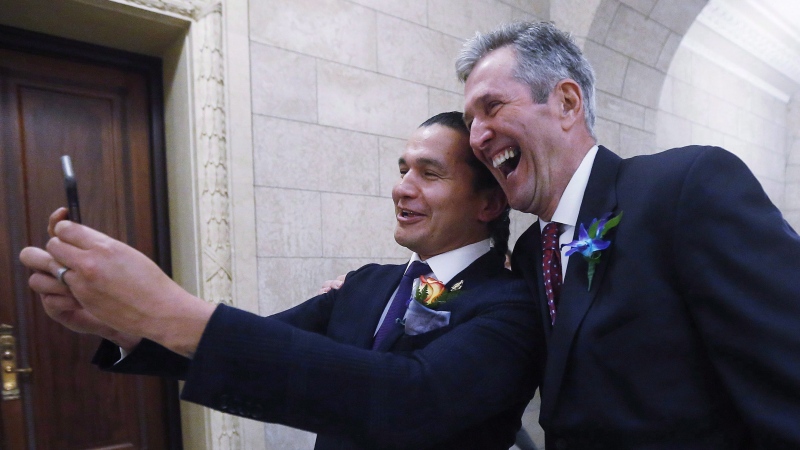 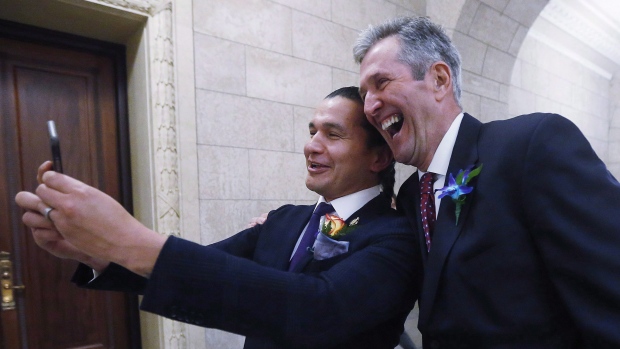 Manitoba’s election campaign has entered its final days with the leaders of the two main parties focusing on their key messages as they hustle for votes in the home stretch.

The New Democrats continue to focus on health care and the Progressive Conservatives are driving home a tax reduction plan for the middle class.

One political analyst expects the two will stay on defence, but he doesn’t expect that will do much to close the gap between them.

Tory Leader Brian Pallister stopped at a school and surrounded himself with families on Wednesday as he again outlined a plan to reduce taxes, which he said would save the average taxpayer $2,020 over four years.

In the evening, the Tories were to hold another over-the-phone townhall and knock on thousands of doors, Pallister said.

“I never take anything for granted. I believe you run through first base, not to it,” he said.

A recent poll shows that the opinions of many Manitobans have remained largely unchanged since the campaign started in mid-August.

The survey by Probe Research Inc. said the Tories were the most popular party and their lead had decreased only slightly. Forty per cent of respondents planned to cast a Tory vote, down from 42 per cent in June.

The New Democrats were at 29 per cent, up three points from June.

The Manitoba Liberals were at 18 per cent, the Greens were at 10 per cent and 12 per cent of respondents were undecided.

The survey was commissioned by the Winnipeg Free Press and CTV Winnipeg and involved 1,200 people who responded to an online survey. It was done between August 13 and 24. Probe said the results provincewide have a margin of error plus or minus 2.8 per cent, 19 times out of 20.

Pallister would not comment on his sizable lead. He said he believes an old adage that polls are for fences.

NDP Leader Wab Kinew said he believes his message is being heard. He remained focused Wednesday on presenting the NDP as the health-care party by announcing in Winnipeg that he would ban mandatory overtime for nurses if elected.

He also promised investments in infrastructure at a campaign stop in Brandon.

Kinew, saying it’s clear the election is a “two-horse race,” dismissed any gains by the Liberals and Greens.

“You have a choice between two leaders: Mr. Pallister and myself.”

Christopher Adams, a University of Manitoba political analyst, said he doesn’t expect the New Democrats to go on the offensive by attacking the Liberals or Greens.

“The Liberals are sitting at 21 per cent in Winnipeg, which is where they really have to be gaining ground,” he said. “I think (the Tories and NDP) prefer the Liberals be ignored rather than highlighted in the campaign.”

The Tories and NDP are spending their political capital by speaking directly to their base, he said.

Adams said the Tories will zero in on their successful slogan around tax cuts — putting money back on the kitchen table — which connects with the middle class.

For the New Democrats, a health focus may pull in some votes, said Adams, but he suggested it will only return a few historically NDP seats to the party.

Voters planning to cast a ballot for the Liberals increased two per cent since June and another recent opinion poll had leader Dougald Lamont getting higher approval ratings than both Kinew and Pallister.

At a campaign stop Wednesday, Lamont promised to fight for a national pharmacare program and to work with any federal government to bring it in.

He said people are positively responding to the Liberal campaign and he remains optimistic for election day.

“There’s often a huge change in the last few days of a campaign. We will just see where it goes.”