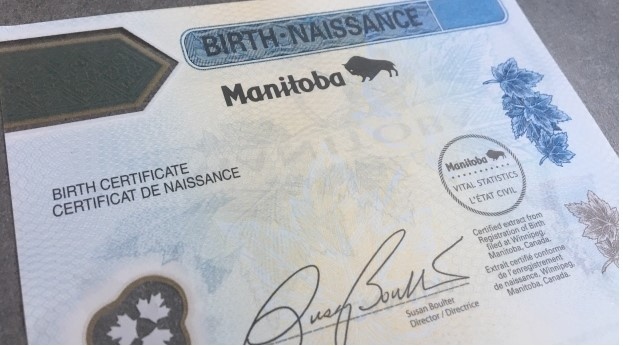 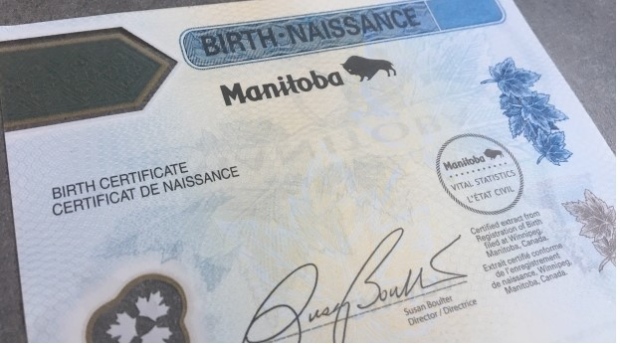 WINNIPEG — Don’t rely on a third party to apply for a copy of a birth certificate. That’s the advice from the Manitoba government’s Vital Statistics Agency after a woman received the wrong birth certificate for her son.

Jennifer Wiebe, who currently lives in Fort McMurray, Alta., says the trouble began when she used a website to apply for a copy of her son’s Manitoba birth certificate, thinking it was the official page.

She says she filled out the information, printed, signed and scanned the form and sent it in with credit card information via Express Post. She says the process cost her $80 for the certificate and $40 for postage.

She was surprised by what was returned to her by mail a few days later.

“I went in and signed for it. And, yeah, we opened it up and it’s the same – the child has the same first and last name, different middle name and different parents and different birth dates,” said Wiebe.

DISAPPOINTED WITH THE RESPONSE

Wiebe said when she called Vital Statistics to report the mix-up, she wound up on hold for 37 minutes. When she spoke with someone, the response was disappointing.

“Once I did get somebody on the phone it was such a nonchalant response I was receiving from the lady, even when I brought up, like, ‘this is personal information that is being exposed. Not just mine, wherever my son’s birth certificate is but the people who I’ve received theirs.’ And she’s like, ‘yeah, we’ll talk to a supervisor about that,” said Wiebe.

Wiebe says the woman advised her to mail the wrong certificate back.

“And we asked about a refund for our thing and she says ‘well, you won’t be re-charged.’ So basically I was told, ‘you’re not going to be re-charged for us expressing out the proper birth certificate. And I said ‘well, this is putting us behind schedule, like we needed this information immediately’.

Wiebe says the woman on the other end of the line also told her a supervisor from the agency would be calling her later in the day to help. That call never came.

Wiebe says the experience, including what she described as the woman’s nonchalant attitude, shocked her.

“There was no apologies, no nothing, and it’s like this shouldn’t be my responsibility. In my mind there should be some other avenue that they have. Maybe they have a courier that they want it couriered directly to them. It’s not my responsibility to fix their mistakes. And if I send it off, what if it doesn’t get to them?”

A spokesperson for Vital Statistics says the mix-up can be traced back to Wiebe’s use of an online third party to apply for the birth certificate. The spokesperson said the third party transcribed the child’s name incorrectly into the Agency’s own application form.

That led to a mix-up at the agency office, leading to confusion with another child with same name, born around the same date.

Vital Statistics says the dispute about a refund, which Wiebe says she’s asked for, must be handled between the third party and the applicant.

To protect the privacy of personal and confidential information, the agency recommends people apply directly online to its own website.

Wiebe said she did eventually receive a follow-up call with an apology from Vital Statistics. She says the agency explained to her that she likely clicked on a link that took her to a third-party site called vitalcertificates.ca, and that’s where the trouble started.

Wiebe says she’s been assured her correct birth certificate is now on its way to her in Alberta via courier.

Her advice after the mix-up and the headaches it’s caused her: “Go and stand in line for these documents. Don’t rely on online services. If I’d known how it would go, I’d have bought a plane ticket to Winnipeg and stood in line.”

With files from Mike Arsenault and Renee Rodgers