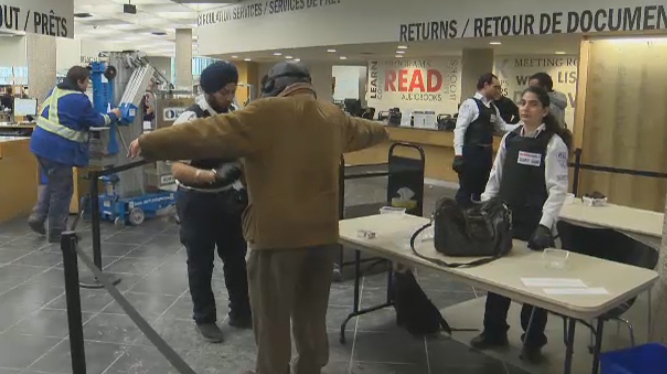 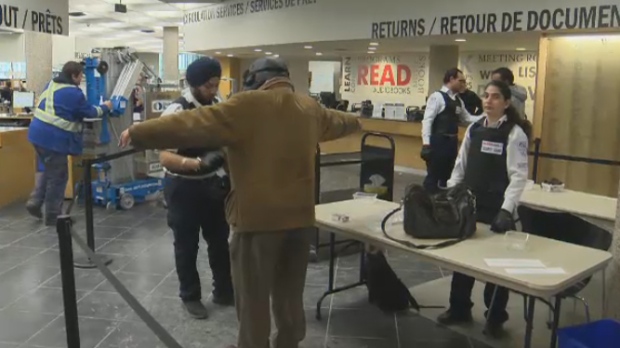 WINNIPEG — A Winnipeg advocacy group dedicated to eliminating airport-style security measures at the Millennium Library is one of several community groups expected to weigh in at a town hall meeting about housing and safety in Winnipeg.

The Fort Rouge-East Fort Garry Town Hall begins at 12:30 p.m. on Saturday and is being organized by Coun. Sherri Rollins.

“These two, interrelated topics are crucial to our city. Housing for everyone in the city is a key determinant of safety and security,” said an email to CTV News about the event.

Sarah Broad, spokesperson for Millennium for All, said the group will be attending the meeting to call for an exit strategy on the security measures at the library.

The group’s demands include removing the security barriers. They remain concerned about the impacts security will continue to have on Winnipeg’s most marginalized.

“It’s already so cold outside, and this is one less place that people can go and feel safe and welcome this winter if city council does not invest in the library,” said Broad.

Since the end of February, library visitors have had to pass through screening that consists of a bag check and metal detection via a hand-held wand.

In September, the city released a report and made recommendations about the measures. It found the number of incidents decreased along with attendance.

“After five months of screening at Millennium Library, the number of incidents has declined significantly. Attendance has decreased, but so has the number of prohibited items, such as alcohol, knives or other bladed weapons entering the library,” the report said.

“Emergency calls for WPS or WFPS assistance have declined and public support has increased in the time following screening implementation.

In an email to CTV News in September, Rollins said the standing policy committee considered the seven recommendations in the report, many of which were based on the premise of creating a path to eliminate the airport-like security.

Six of the seven recommendations were approved and pertain to intervention and prevention.

She said recommendation five, a $103,000 ask to purchase additional metal detection and create security lanes was not approved and removed.

Rollins also said administration would report back to the committee on implementation and a phasing out of the airport-like security.