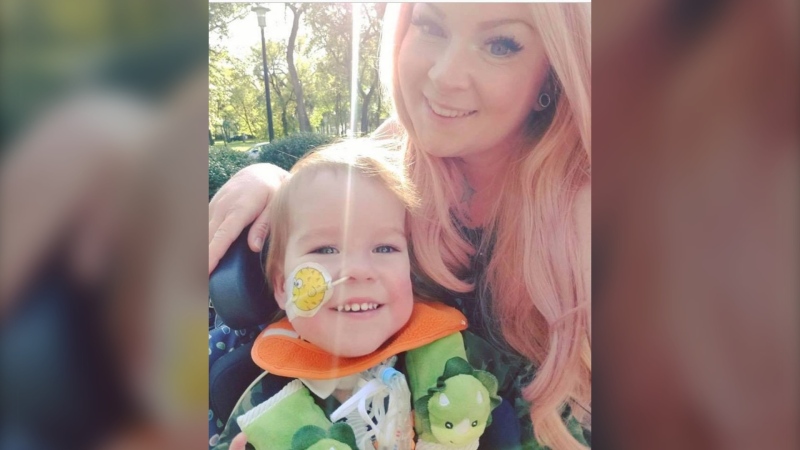 WINNIPEG — A Manitoba pumpkin farm is donating admission fees from its busiest day of the year to a family that’s fighting to make sure their two-year-old boy has the best time possible, during what’s expected to be a short life.

Melody Schwabe, owner of the family-run farm Schwabe Pumpkins, said she was inspired to donate all admission fees earned on Thanksgiving Monday after a wheelchair-accessible taxi rolled up to the farm one day.

A family got out with a young boy in a wheelchair whose expression caught Schwabe’s attention.

“Their son was really excited about seeing everything,” she told CTV News.

Schwabe got to talking with the boy’s parents, and learned of the grave challenges they were facing.

Raising a child in hospital

The boy’s mom, Bekka Peterson, told CTV News that she was pregnant when she found out her son, Damon, had what’s called an omphalocele, meaning some of his organs developed outside his body, into his umbilical cord.

After he was born, they discovered more.

“Because of his omphalocele, he didn’t have room in his body for his lungs to grow the same as a regular child,” Peterson explained.

Damon has a lung disease called severe pulmonary hypertension, a lung condition called pulmonary hypoplasia, and a congenital heart disease in the form of three holes in his heart.

She said another condition with his airway is also suspected.

“Through his life, he has been too unstable to test for that one,” she said.

Peterson said her son has a tracheostomy, relies on a ventilator to breathe and is fed through a tube. He also relies on a number of medications, one of which is delivered through a 24-hour infusion.

Initially, he wasn’t expected to live longer than six months.

“We’ve had a lot of times where we weren’t sure whether our son was going to make it through the night, in hospital,” she said.

The family juggled life at the hospital and life at home with their three other children — aged four, 10 and 12 — for nearly two years before successfully advocating to bring Damon home, on palliative care.

“He’s the most complex child in the community,” she said, adding that they had to get approval for equipment in order to even begin the process.

He was discharged just days before his third birthday, Aug. 16.

A family tradition made whole

Peterson said her family has made a tradition out of visiting Schwabe Pumpkins every year.

“And this year was the first time we were able to take our son,” she told CTV News, her voice breaking with emotion.

She said what she didn’t expect was how big of a deal the visit turned out to be for someone else.

Melody Schwabe told CTV News the visit came after a difficult year on the farm. A barn had come down in a storm, taking the displays they use each year with it, and they came close to not opening at all. She said she was grateful for help from friends, family, and other farmers, but the challenges continued into fall, with the wet harvest season.

“And there’s been a few days where I’m in the barn this year, in the cold, and I’m thinking, why are we even doing this anymore, you know?

“Because it’s not like we’re getting rich off of this or anything. But it’s my customers,” she said, explaining how seeing Damon’s excitement over the farm touched something in her.

“There was just something about Damon, when he came into the barn and his face just lit up, and looked around at the decorations.”

Peterson, who started a GoFundMe before Damon came home, said she isn’t working right now, and her husband is on compassionate care leave so isn’t receiving a full income.

She said not all of Damon’s medical expenses and medications are covered, and arranging wheelchair-accessible transportation has also been a financial burden.

“We want to give the best possible life for our son that we can, and we have the opportunity, but we don’t always have the funds,” she said.

Schwabe has shared a link to Peterson’s GoFundMe to her farm’s Facebook page, along with her promise to donate.

“We have to give back here. And try to lighten the load for this family, somehow,” she said.

-With files from CTV’s Stephanie Tsicos and Kayla Rosen