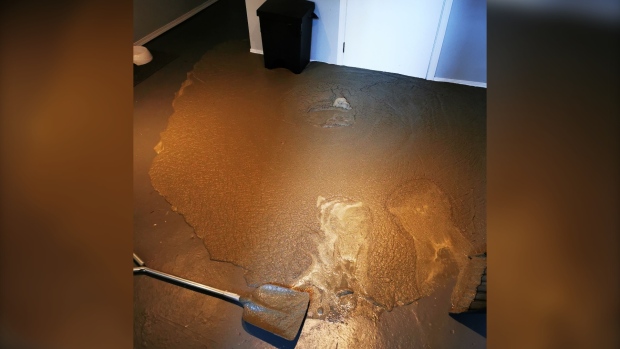 WINNIPEG — Cement in sewer lines is a growing problem in one Winnipeg neighbourhood, according to a resident.

Kaitlin Bialek’s home was one of the houses affected when a breach occurred during construction of a new land drainage sewer trunk shaft at the intersection of Semple Avenue and Scotia Street, resulting in cement entering residential sewer pipes.

Bialek said the city had two homes’ sewer lines excavated Friday with varying degrees of success, but the number of homes with cement in the lines has now grown.

The city said the number of affected homes now sits at 12, and expects all of the properties will have their sewer lines cleaned by June 5.

A plumber, hired by the contractor who had damaged the sewer system, came to Bialeks’s home after the backup to scope and clean out the lines on behalf of the contractor. According to Bialek, the plumber was supposed to return and check the plumbing, weeping tile and backflow valves to ensure no additional damage was done.  However, on Friday a representative from the contractor gave her some different news.

“They came and found me today when I was outside and said I have news for you, and this is the news. We are not sending these plumbers back to check those things for you,” said Bialek.

Getting her plumbing fixed is now in the hands of her insurance company. They are dealing with the various contractors and the city, but Bialek said that communication could be improved.

“I had some gentleman from the city come out this morning and apologize and tell me to file a claim with the city. That was it,” Bialek said.

A city spokesperson told CTV News on Thursday they are not able to comment on specific claims but in an event a property owner has damaged property, and believes the city, or a contractor working on behalf of the city, is responsible they may choose to submit a claim to the city.

“Not having them pay for that, to come back is not right,” said Bialek. “I want to see the city pay for that. All of our homes have been affected. We need them to come out and they need to pay to have our weeping tiles checked, our backflow valves checked. Every single pipe in our house needs to be checked.”

-With files from Stephanie Tsicos