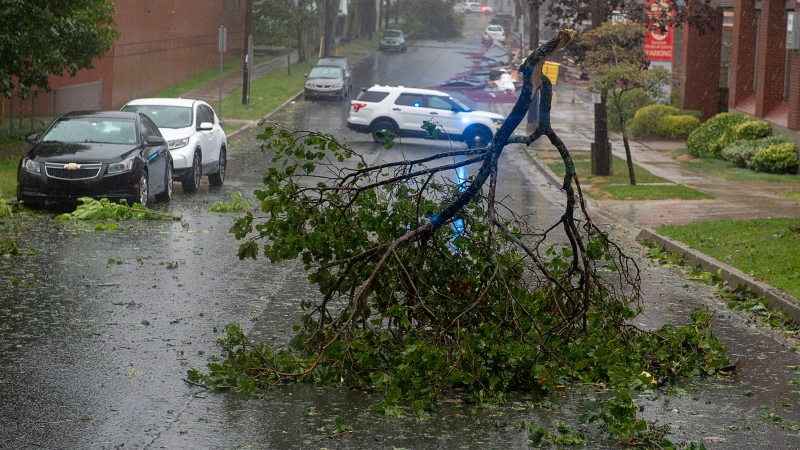 As Hurricane Dorian barrels toward the Maritimes, hundreds of thousands of people are without power as emergency officials warn that the recently-upgraded Category 2 storm will bring dangerously high winds and possible flooding.

The powerful hurricane, which killed 43 people in the Bahamas and ravaged U.S. coastlines earlier this week, is expected to make landfall between 6:30 p.m. and 7 p.m. local time somewhere between Halifax and Clam Harbour, a community about 73 kilometres east of the provincial capital.

Damage was already reported before the storm landed. Strong winds in Halifax have littered tree branches and construction debris across roads as tall waves crash against the shore. In Halifax, one home has lost a roof.

Nova Scotia Power was reporting power outages affecting more than 264,000 customers, with at least 70,000 in the Halifax area. In New Brunswick, more than 50,000 households and businesses are without power.

The storm was initially expected to hit as a Category 1, but the National Hurricane Centre in Miami upgraded it to a Category 2 on Saturday. Powerful winds capable of reaching speeds between 90 km/h and 120 km/h are in the forecast, and waves could reach as high as 12 metres.

Nova Scotia is expected to get the worst of the storm, but other provinces in Atlantic Canada could see power outages, high wings and localized flooding. Wind and rainfall warnings are in effect for parts of New Brunswick, with some parts getting up to 150 millimetres. Meanwhile, in Prince Edward Island there’s a tropical storm warning and various wind and tropical storm warnings for areas of Newfoundland and Labrador.

Residents are being warned to stay indoors, not to drive anywhere and avoid the coast.

Environment Canada has also issued storm surge warnings for the Gulf of Saint Lawrence. Senior Climatologist Dave Phillips told CTV News Channel on Saturday that, typically, when hurricanes reach Canada, “they begin to downgrade, but this one is staying alive and not slowing down as much.”

OFFICIAL: WE WOULD RECOMMEND PEOPLE ‘SELF-EVACUATE’

At the press conference on Saturday morning, Halifax’s chief of emergency management warned people on the coast to leave their homes if they feel at risk and head to government emergency shelters set up across the province.

“The residents know themselves, know their property. So we would recommend that they self-evacuate if they have nowhere else to go,” Erica Fleck said at the press conference. “We could issue mandatory evacuations, but we’re not there at this point.”

In addition to government shelters, Ancel Langille, Canadian Red Cross’s senior manager of emergency management for the region, said they’ve opened up three shelters of their own which can each house around 60 people.

To prevent flying debris, Fleck said officials had been contacting people with loose objects on their property as well as construction crews in the region to clean up sites.

He added, “when we get rainfall amounts that exceed 20 millimetres per hour — which is very possible with this, almost likely, that overwhelms many systems — and you tend to get flash flooding,”

Provincial and municipal governments activated emergency plans, including cancelling some public services. On Saturday morning, CTV News’ Vanessa Lee reported that flights in and out of local airports were cancelled.

On Twitter, Prime Minister Justin Trudeau wrote that the federal government was ready to help the region when the storm hits.

Public Safety Minister Ralph Goodale tweeted that the Canadian Armed Forces would be deployed to Nova Scotia to help with recovery efforts.

Halifax mayor and council may consider a state of local emergency based on updated storm projections, Fleck said. This is the same day, the city is expected to shut down transit and ferry service. On Friday, the commander of Maritime Forces Atlantic said a group of NATO warships visiting Halifax were pulled out of the port.

PEOPLE HAVE BEEN STOCKPILING SUPPLIES

Halifax Water said emergency operations will be open 24 hours a day during the storm.

“Just be ready for a storm that might knock out water service or wastewater, storm water service for up to 72 hours,” James Campbell of Halifax Water told CTV News Atlantic. “We don’t anticipate there will be a loss of water service, but folks should always be prepared for that eventuality.”

Across the Maritimes, people have begun stockpiling supplies, such as propane, gasoline, and groceries.

Fummi and Akin Odeniti told CTV News Atlantic that “it’s more or less like panic buying. You know, you don’t know what the hurricane is going to look like.”

New Brunswick Premier Blaine Higgs told The Canadian Press, “as with past emergency situations we are asking all New Brunswickers to be prepared and to heed the advice of safety officials.

“We should pick up extra water and non-perishable food items. Make sure you have fresh batteries for your flashlights and radios and make sure your cars are full of fuel.”

Meanwhile, further inland Nova Scotia apple growers are worried that their still-ripening crop will be destroyed by the wind.

With files from The Canadian Press

Reading on an app? Tap here for full experience.