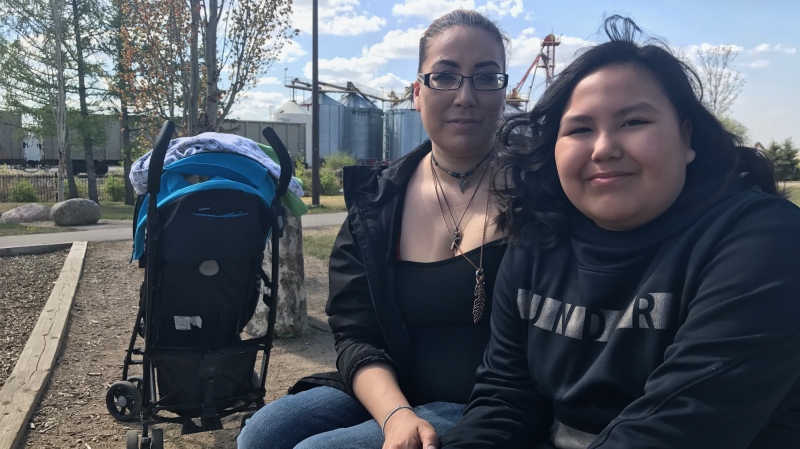 An evening stroll through a Saskatoon park took a violent turn for a Manitoba woman.

Halcrow, 33, was at Pleasant Hill Park Monday around 7 p.m. Monday when she was attacked by a group of children.

In a video submitted to CTV News by a witness, Halcrow can be seen struggling to fight the group off.

She told CTV News she feared for the life of her 10-year-old child, who could only watch as her mother was beaten.

“She kept asking me if I was okay.”

Halcrow said the attack began after she recorded a group of boys harassing a man pushing a fridge on a trolley through the park.

“They kept throwing sticks and stones at the man and I told those kids to quit doing that. I don’t stand for that.”

When they realized she was filming everything on a phone they went after her, she said.

Halcrow said the kids knocked her glasses off her face and attacked her.

“I have PTSD so I have a fight-flight instinct and I could have ran, but I don’t think my daughter and her friend could outrun those kids,” she said.

“Lots of punches to the head and the back. Three bruises along my back and mostly my knees.”

“Sad, because she was getting beaten up by those kids,” Mckay said.

Halcrow didn’t know she was being recorded by a bystander, but said she’s thankful it was captured on camera.

The witness requested anonymity because he fears for his safety.

While Halcrow continues to recover from the attack, she said she isn’t holding any grudges.

“I prayed that night for all those kids and I asked God to forgive them for what they did,” she said.

Halcrow said she reported the incident to police and is looking to press charges.

Saskatoon Police Service spokesperson Julie Clark told CTV News in an email: “We have since been in contact with the complainant and will be looking into the matter.”

Police encourage anyone who may have witnessed this incident to contact them.