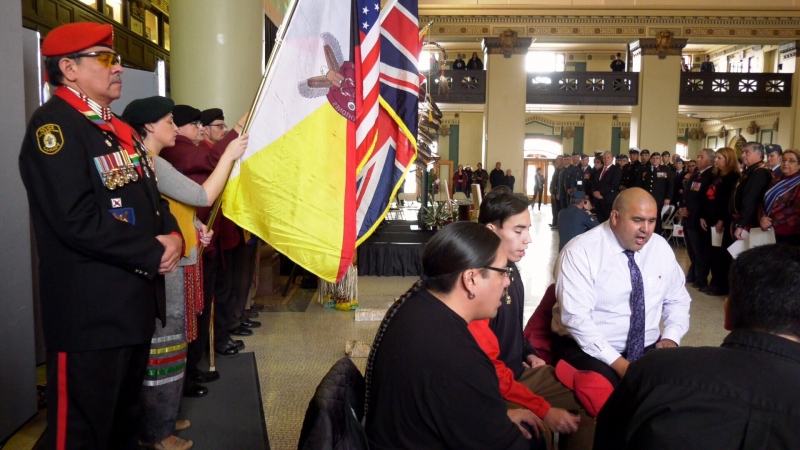 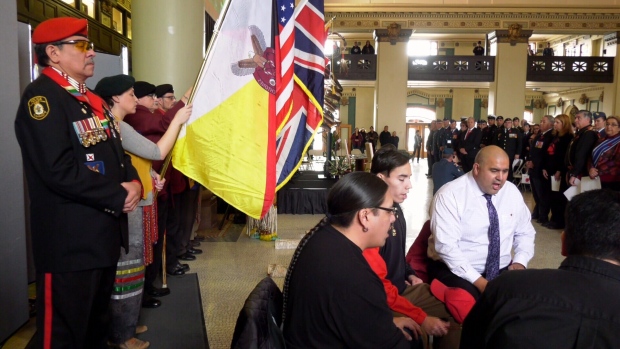 Bill Greenwalt, the vice president of the Canadian Aboriginal Veterans of Manitoba said the ceremony held there has only grown in the past few years.

“We sat here and hand shook with all the people and that was incredible,” said Greenwalt. “That’s never happened before.”

Aboriginal Veterans Day is a memorial day observed on Nov. 8 in recognition of indigenous contributions to the military, in particular during the First and Second World Wars and the Korean War.

First Nations, Metis, Inuit, and other Indigenous people were not conscripted in these wars because they weren’t considered Canadian citizens at the time. Despite that, it is estimated that more than 12,000 Indigenous men and women volunteered and served.

“Because of the history of Canada and everything involving the aboriginal people, we had a hard time being accepted into society back in the Second World War, Korea, and the First World War,” said Doug Harney of the Aboriginal Veterans Association of Manitoba. “So we were not allowed to parade in the November 11 ceremony because they said we, as people, didn’t have to serve.”

Since then, Indigenous veterans have gained more recognition for their sacrifices.

Lieutenant Colonel George McLeod is from the Qalipu First Nation in Newfoundland, and has served in the military for over 30 years. He said having a day dedicated to Indigenous veterans is very special to him.

“There are many stories of many veterans that aren’t told,” he said. “It’s finally being recognized as being veterans and being equal to every other veteran. It’s important to that generation that suffered that. And those of us who walk behind them — it’s important to remember it.”

Aboriginal Veterans Day was inaugurated by Winnipeg’s city council in 1994, and has since spread nationwide.