WINNIPEG — A dozen Winnipeg homeowners are dealing with an unexpected mess.

Over the weekend, cement leaked into a number of homes on Semple Avenue through the sewer system.

“We had a disaster, to say the least. It was a disaster,” said George Munroe.

“We had concrete coming up our sewer system.”

Munroe said about 10 centimetres of cement came through his pipes, and he wasn’t the only homeowner on the block impacted by the mess.

“My husband and I were painting our kitchen, and my husband went downstairs to get a paint roller and he discovered there was about four feet of cement coming out of our sewer drain,” said Kaitlin Bialek.

She said she was shocked at what she saw, and quickly ran up and down the street alerting her neighbours.

The city said a new land drainage sewer trunk shaft is being constructed at the intersection of Semple Avenue and Scotia Street.

“On Saturday, May 29, a contractor hired by the city was grouting the trunk shaft, when a breach of the combined sewer occurred,” a city spokesperson said in an email to CTV News. “This breach allowed grout to enter the sewer services of some homes.”

“My first reaction to the city workers was, ‘What do we do? We have a bunch of cement sitting on our floor in the basement,’” said Bialek.

“A bunch of them assured me that they would be sending people to clean it up. After about half an hour, I said to my husband, ‘We have to call our insurance. This is cement. It’s going to harden.’”

In total, the city said it’s aware of 12 homes affected, and said all but one household should be able to access the sewer to drain their homes. 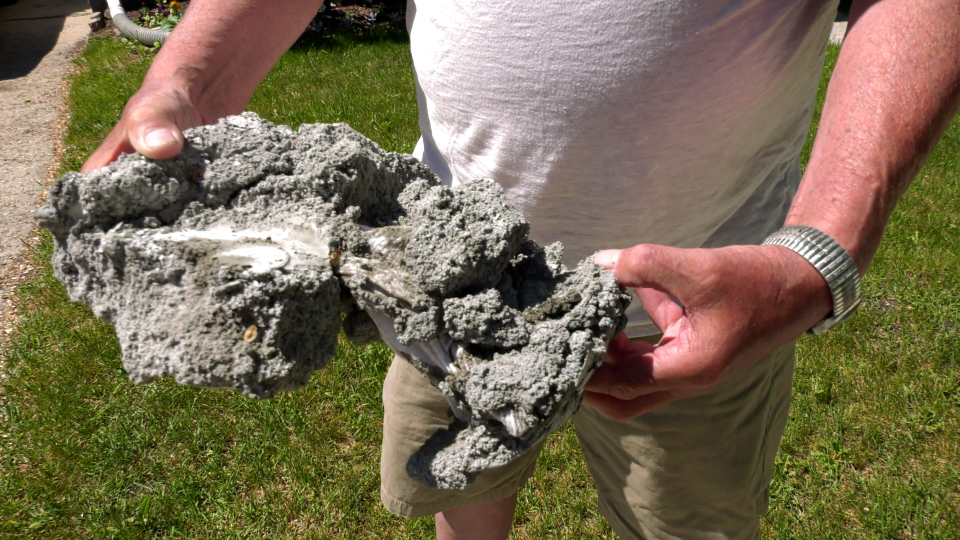 Greg Munroe is holding a dried piece of cement that had leaked into his house on May 29, 2021. (Source: Stephanie Tsicos/CTV News)

“We are not able to comment on specific claims; however, in the event a property owner has damaged property, residents should first contact their insurance representative for advice on how to handle their loss and take measures to protect their property from further damage,” said a city spokesperson.

“If a resident believes the city, or a contractor working on the city’s behalf, is responsible, they may choose to submit a claim to the city.”

The city said residents can call 311 for more details on that process.

“I don’t know what the damage is going to be, but the cost of cleaning up—we spent about four and a half, five hours,” said Munroe. “We had to run all the water. The water bill is going to be humungous.”

Both Munroe and Bialek are disappointed with the city’s response so far.

“If it wasn’t for myself and all of our neighbours communicating with each other with what’s going on… We would all be in the dark,” said Bialek. “We’ve had to come out and advocate for ourselves to get these people to clean our sewers.”

The city said crews have cleaned the combined sewer in the area and are currently investigating its condition. It also said crews are still investigating the cause of the breach, and said repairs to the breach are expected to be completed by mid-June.