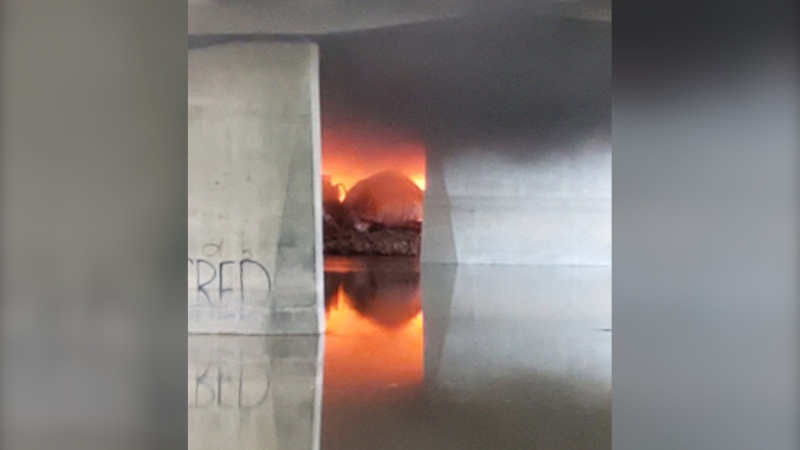 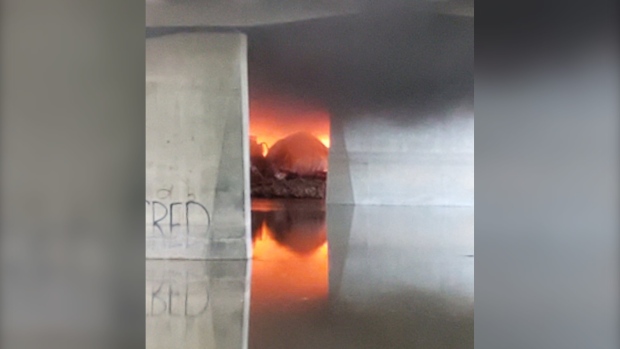 WINNIPEG — A man living at a tent camp that was destroyed in a smoky fire under the Osborne Street Bridge Wednesday morning said he’s lost everything.

Firefighters were called to the blaze near the Manitoba Legislative Building shortly before 7:45 a.m., arriving to find heavy, black smoke.

It took about 25 minutes to put the fire out. Meanwhile, Osborne Street was reduced to one lane during the morning rush.

CTV News spoke with a resident of the camp, Billy, who said around 14 people had been living there recently, but only seven were present at the time the fire broke out.

“I could smell this plastic burning and, just at the same time as I was unzipping my tent, somebody screamed, ‘We need water!'” he said.

Billy said he escaped his tent just in time to see the camp ignite.

“When I climbed out, the flames were already touching the bottom of the bridge, it was so big.”

The City of Winnipeg said one person was assessed by paramedics at the scene.

Billy said it was a girl who was in the tent where the fire started.

“She burnt her hand trying to extinguish the flames. Minor blistering, I guess.”

No one else was hurt. The city said the cause is under investigation.

Billy, who said he has been living at the camp off and on, said the camp is like any other community, only with walls of plastic.

“We’re one big family down here,” he said. “There’s only one rule, it’s respect.”

Billy said the fire took everything he owns, and all but one person at the camp — an 87-year-old woman whose belongings didn’t burn — are in the same boat.

“It’s just stuff,” he said. “But with the weather changing, and the cold coming in, it’s going to be hard.”

-With files from CTV’s Mike Arsenault and Kayla Rosen