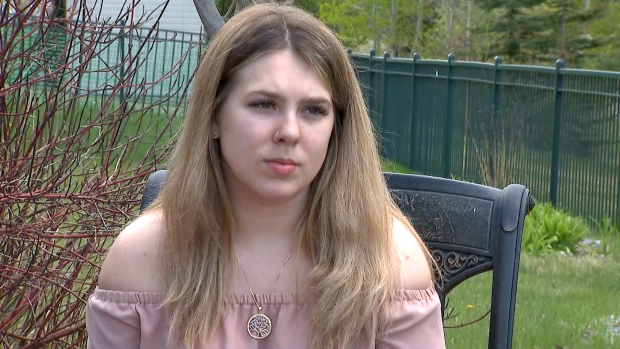 TORONTO — The daughter of an Alberta woman who died from rare blood clots after a dose of the AstraZeneca vaccine is now left with few supports as details surrounding a promised federal vaccine injury compensation fund remain sparse.

Jordan Stonehouse, 19, lost her father two years ago to a brain aneurysm and lost her mother Lisa in early May after she developed blood clots following the AstraZeneca vaccine, a condition known as vaccine-induced thrombotic thrombocytopenia (VITT).

“I don’t even know how I feel anymore, still pretty numb from everything,” Stonehouse told CTV News. “I’m still grieving my dad and now my mom’s gone and I certainly think it’s real, I just can’t really process that they’re both gone and I’m just here alone.”

For Stonehouse, who is studying to become a nurse, her family tragedy has brought on a lot of grief and worry, especially when it comes to how she’ll be able to financially support herself without her mother.

“I’m 19 years old and I didn’t know how expensive life actually is and it’s sucker punched me a little bit,” she said.

In December 2020, the federal government announced a pan-Canadian no-fault vaccine injury support program (VISP) meant to help people in Stonehouse’s shoes. But now six months and more than 18.5 million vaccines later, there are still few details about the program.

During a House of Commons Health Committee on April 30, President of the Public Health Agency of Canada Iain Stewart said that the government had selected a third party to oversee the program but that third party was “still finalizing their process and getting themselves set up and ready, but they’re moving along quite quickly.”

Stewart added that the program will be retroactive to the beginning of Canada’s vaccine rollout, meaning anyone injured by a vaccine may be entitled to the compensation.

In a statement, the office of Health Minister Patty Hajdu said details “will be provided in the coming weeks,” but that the program will be retroactive.

“My heart is with families that have been affected by vaccination in any way,” Hajdu said in the statement.

CTV News reached out to Health Canada for comment on the VISP program, but was referred to a statement from April 28 that mentioned the program will cover all Health Canada-approved vaccines and outlined the process for seeking a third party to implement the program.

The government has not offered further details on the compensation plan, when it will available for Canadians to make claims, which third party is administering the program and whether people with VITT will allowed to apply.

“There’s just a lot I have to pay for and I know the compensation from the government would help drastically with that, because the bills keep coming,” she said. “I never had to worry about bills before my parents covered that, but now I’m on my own and have to buckle up and be able to pay for those myself.”

CANADA SLOW TO ADOPT A VISP

Advocates in Canada have been calling for a VISP since the 1980s, but to date Canada is the only G7 nation without such a program, though Quebec has had a provincial version in place since 1987.

There is also a fund for 92 low-and middle-income nations provided through the World Health Organization and the COVAX program.

These programs are meant to support those who experience serious side effects from a vaccine or treatment, without placing the blame on the pharmaceutical companies who might be slower to develop a treatment if they’re held liable for every adverse effect from a vaccine.

Shawn Harmon, a policy analyst at Dalhousie University’s Health Law Institute, said these programs are also crucial for the people taking these vaccines, who are ultimately doing something for the greater good.

“We’re asking people to take risks, for not only their own health, but for the benefit of society,” he said.

“When someone is injured from a product or process that we are recommending — and indeed strongly encouraging them — to take for the benefit of society, then that creates certain moral burdens that we should then follow through and provide support to those people, because they’re are bearing costs for us.”

Harmon hopes that when the Canadian program is unveiled that it provides easy compensation for those who need it.

Injuries or serious side effects stemming from a COVID-19 vaccine are extremely rare, but they happen. As of May 14, there have been 872 serious adverse events in Canada following a vaccine, representing 0.006 per cent of all doses in the country.

Stonehouse’s mother is the third confirmed death in Canada related to VITT. Previously, a woman in her 50s from Quebec and a New Brunswick resident in their 60s also died from the rare condition.

In Langley, B.C., 43-year-old Shaun Muldoon needed emergency surgery to remove about two metres of his small intestine after doctors found a blood clot linked to the AstraZeneca vaccine.

In an email, a family friend of the Muldoon family, who wished to remain anonymous, told CTV News that he supports compensation for those with serious side effects from the vaccine.

“It is completely unfair and inequitable that people who take vaccines for the ‘common good’ and thereafter are injured, or wrongfully killed, are then left on their own to shoulder the personal and financial impact as an individual (or) surviving family with no financial compensation,” he wrote in the email.

As of May 13, there have been 18 confirmed cases of the rare blood clotting condition, known as VITT) in Canada​, with another 10 cases under review.

STONEHOUSE’S FAMILY TURNS TO GOFUNDME INSTEAD

Without support from the VISP, Stonehouse’s family has been forced to turn to GoFundMe, where they’ve been able to raise more than $69,000 since May 3.

“(The support is) absolutely amazing,” said Wilfred Lowenberg, Stonehouse’s godfather who started the campaign. “It’s just from all parts of the world that have heard the story and just want to help out in any way they can.”

Even with the GoFundMe, Lowenburg worries that without support from the government, his goddaughter will struggle to pay the bills while she’s in school.

“She can’t work full-time hours to pay the bills so having something like this and just recognizing that the government understands and cares about the families of that have suffered through this is extremely important,” he said.

“None of this will bring Lisa back, nor anyone else who suffered through this tragedy… (but) knowing that the government cares about its people is extremely important.”

Stonehouse is grateful for the support from the GoFundMe campaign, but worries for others who may not be as fortunate and really need the VISP.

“It’s just more so disappointing (the government doesn’t) have these plans set up already,” she said. “There’s so many families around Canada like me, and we need this.”