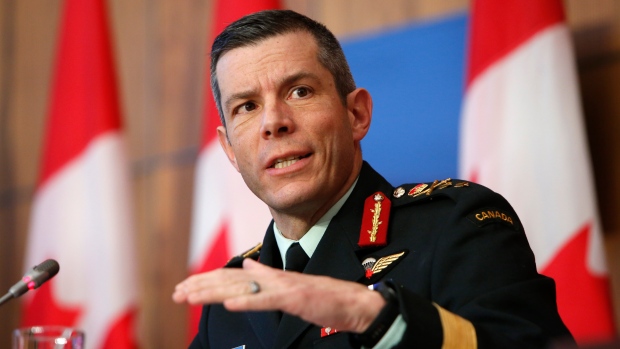 OTTAWA — OTTAWA — Maj.-Gen. Dany Fortin has left his role with the Public Health Agency of Canada (PHAC) as the military general in charge of the logistics of Canada’s COVID-19 vaccine rollout and is now the subject of a military investigation.

The Department of National Defence and the Canadian Armed Forces issued a joint statement late Friday evening, stating that acting Chief of the Defence Staff, Lieutenant-General Eyre will be reviewing next steps with Fortin.

Fortin came into the role in November 2020 with 30 years of military experience. He graduated from the Royal Military College Saint-Jean with a science degree in 1991 and went on to hold a series of key appointments, including:

Fortin also served as the commander of NATO’s Iraq mission between 2018-19 and most recently was the Chief of Staff for the Canadian Joint Operations Command.

In his latest role, he led a team of nearly 30 CAF members already working out of the PHAC’s “National Operations Centre,” and was given the official title within that agency of Vice President Logistics and Operations.

Late Friday Federal Defence Minister Harjit Sajjan released a statement saying he is “committed” to change in in the Armed Forces.

“As I have stated previously, I am committed to working to build a true culture of inclusion for the Canadian Armed Forces and The Department of National Defence, where everyone is treated with dignity and respect. We are committed to this lasting change – one that sheds toxic and outdated values, practices, and policies” said Sajjan in a statement.

He said the defence staff advised him that General Fortin has stepped aside and he has no further comment at this time.

“We remain focused on the vaccine rollout, with millions more vaccines arriving every week. The women and men of the Canadian Armed Forces will continue to fully support the vaccine rollout, as well as the rest of the government’s response to COVID-19 across Canada,” said Sajjan.

Several other high profile military leaders are also at the heart of investigations for allegations of misconduct.

The nature of the investigation into Fortin is unknown at this point.