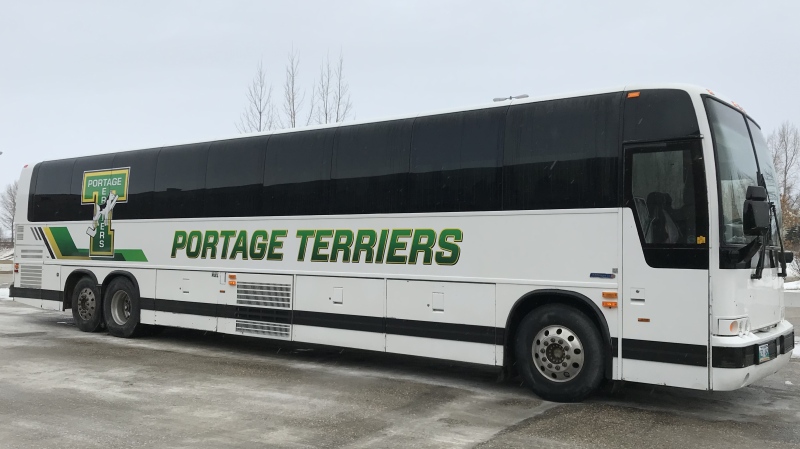 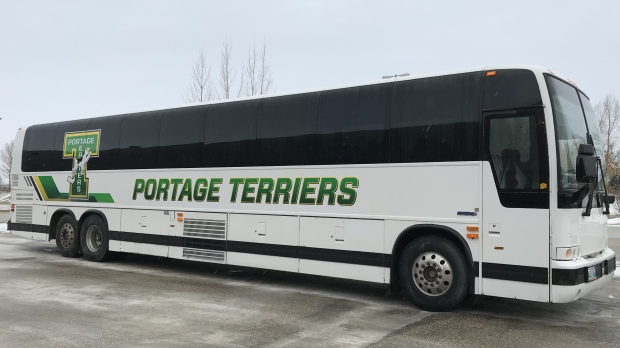 A Manitoba Junior Hockey League team wants players and staff to start buckling up on a recently-acquired team bus which is already equipped with seatbelts.

The push comes following new rules announced by Transport Canada this past summer, which will require all new highway buses across the country to be equipped with seatbelts starting September 2020.

Talks are also underway within the MJHL about safety on buses following the crash involving the Humboldt Broncos hockey team. Sixteen people were killed and 13 injured when the Broncos’ bus collided with a semi-truck in rural Saskatchewan in April.

The Portage Terriers new team bus, a 55-seater purchased to replace the old bus which stopped working last season, is equipped with seatbelts.

“It just sort of worked out that way,” said Koroscil. “We had started looking prior to the Humboldt accident. I think it was more of an opportunity of this bus came along and it did have seatbelts which is a good thing.”

While Ottawa is requiring buses be equipped with seatbelts, seatbelt use falls under provincial jurisdiction. It’s not currently mandatory in Manitoba but once the federal regulations take effect the province will require passengers to buckle up on buses where seatbelts are available.

“Manitoba will undertake a minor amendment to the proposed Vehicle Equipment, Safety and Inspection Regulation of the Highway Traffic Act required to align with and reflect the updated federal standards requiring seatbelts in new buses by September 1, 2020,” a provincial spokesperson told CTV News in an emailed statement.

Terriers forward Reilly Funk said the Broncos crash weighed heavily on players last season and changed how they felt about getting on the bus.

“You never used to think about that,” said Funk. “It goes through your mind.

“Once it happened it was on your mind a lot.”

Funk said not all players, including himself, always use the seatbelts on the new bus, but he thinks it may be time for that to change.

“Some guys do. Not a lot of guys do, honestly. It’s just not a thing that’s happened,” said Funk. “Once the accident last year…some guys started using them.

“It’s something that I think needs to happen.”

“Obviously the seatbelts are in the vehicle so our goal or our hope is that players and staff do use them,” he said. “Humboldt‘s in everybody’s mind and the thoughts are seatbelts could’ve helped some of those people.

“We need to do a better job on the educational side of things and promoting the use of them and try and make sure everybody does use them.”

MJHL commissioner Kim Davis said some teams in the league own their buses while others take charters.

Davis said there’s no league-wide policy requiring seatbelt use on buses, but he hopes team staff and players will use them when available.

“We do encourage it,” said Davis. “The board of our league has met on two occasions since the tragedy that occurred in April.

“We’ve discussed the topic of enhanced safety on our buses that the teams use including the use of seat belts.”

Davis added it wouldn’t be practical to require teams to install seatbelts on team-owned buses because of the huge cost involved.

Matt Friesen, director of marketing and business operations with the MJHL’s Winkler Flyers, a team which owns a bus, said the club has looked into installing seatbelts and is waiting to hear if it’s an option.

“The safety of our players is a top priority for the Winkler Flyers and we are looking into different options in terms of safety features, like seatbelts, for our bus,” said Friesen.

Some provinces, including Saskatchewan, Alberta, and B.C., already require passengers to wear seatbelts when they are available.

CHARTER COMPANY SAYS MANY OF ITS BUSES ALREADY HAVE SEATBELTS

Beaver Bus Lines general manager John Fehr said about half of the company’s fleet of 16 highway buses already have seatbelts.

He said the company started buying buses with seatbelts around five years ago.

“Whenever we buy new buses we get them outfitted with seat belts,” said Fehr.

But he said until new rules governing seatbelt use come into force in Manitoba he can’t force passengers to buckle up.

“It’s their option if they want to wear them or not,” said Fehr. “It’s purely optional.”