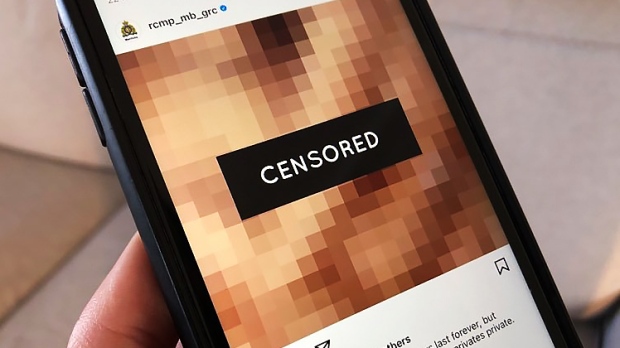 WINNIPEG — RCMP in Manitoba are apologizing over a social media post that warned people about sharing intimate images of themselves with others.

Over 290 comments were made, including one by Karen Seeley, a lawyer in Dryden Ont. She said she saw the tweet multiple times on her feed from other lawyers.

“I went and actually looked at the tweet and I was disgusted,” she said. “It’s victim-blaming.”

Seeley said sharing intimate images is not illegal, but sharing an image without another person’s consent is another matter.

“It’s embarrassing when that happens and not because of anything they did, it’s embarrassing because somebody shared something so personal to humiliate someone else and that’s just wrong,” said Seeley.

“We apologize if anyone … was offended by it.”

Manaigre said the post was part of a broader series of tweets RCMP issued to promote internet safety. The message in this particular post was worded poorly, he said.

“Our intent was to bring awareness that, yes, technically, it is legal to take pictures and share it with whoever you wish. The illegal part is the unauthorized sharing without your consent.

“We’re definitely not trying to put this on the victims,” said Manaigre, who added that police receive many complaints of this nature and take them seriously.

This report by The Canadian Press was first published Feb. 15, 2020.

-With files from CTV’s Rachel CrowSpreadingWings