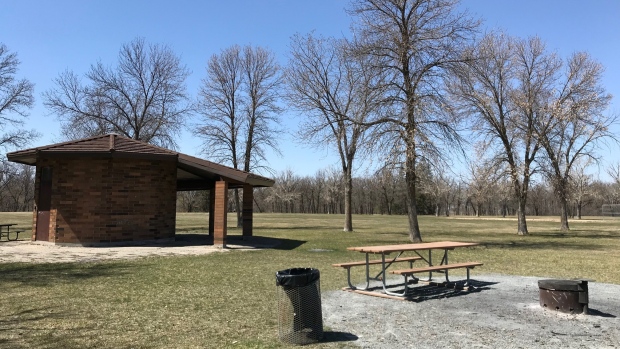 Under the new measures only one member of your household is allowed in stores and you can only go to places like parks and golf courses with people you live with.

Grant Reilly had a weekend tee time with friends but now members of his foursome will have to split up.

“Going down to basically onesomes because obviously all of us don’t live together so yeah it’ll affect us greatly now on the weekend,” Reilly said.

Steve Wood, director of operations at St. Boniface Golf Club, said the course has had to rejig tee times and won’t be allowing non-household members to golf together.

“We have to say to people it’s going to be household only,” said Wood. “If we’re not sure, if we don’t know who they are, we’ll be checking their identification and if the addresses don’t match then unfortunately they won’t be permitted to play together.”

The rules apply to all recreation spaces including playgrounds parks and sports fields. It comes following record daily case counts and pressure on hospitals and intensive care units.

Public health officials said Thursday while there have been some workplace clusters, a lot of transmission is occurring at social gatherings with some people getting sick after attending potlucks.

“We need adherence,” said Atwal. “We need to Manitobans to really adhere, to stop those interactions.”

Under the new restrictions, camping is still allowed with members of your own household.

But gatherings away from your campsite with people you don’t live with have been banned.

“Essentially the only thing that has really changed is people are no longer allowed to congregate in the public green spaces in parks with people outside of their household,” said Elisabeth Ostrop, manager of recreation and education services with Manitoba Parks.

While the guidance has been to send one person shopping, public health orders will now only allow one member per household in stores with exceptions for single parents and people who have a caregiver.

Back on the golf course the new rules mean fewer players will be able to get in a round this weekend but the courses can stay open.

“For those that have members of their household that golf they can join one another,” said Jared Ladobruk, Golf Manitoba’s executive director. “Or, for those wanting to get out themselves, if they can get a tee time, it’s still open for business.”

“Things are changing so fast because of the pandemic, the situations, the numbers and I understand why they’re doing it,” said Reilly. “They’re trying to keep everybody safe.”

The new orders will remain in place until midnight Wednesday.

The province said people who live on their own can still have one other designated person over at their own home or visit that person’s house but they cannot take part together in golf or other outdoor recreation.

Indoor and outdoor gatherings on private property are still prohibited for people who don’t live alone.