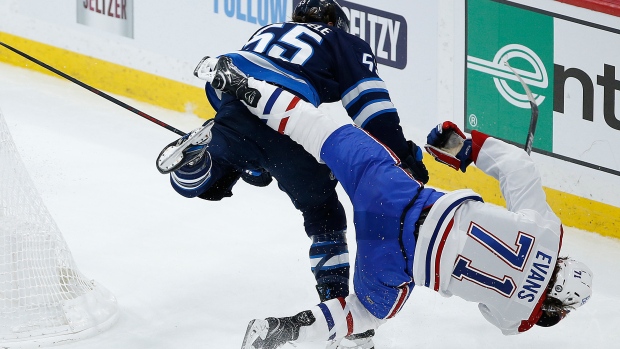 WINNIPEG — Winnipeg Jets centre Mark Scheifele has been suspended four games for his crushing hit on Jake Evans of the Montreal Canadiens in their playoff series opener Wednesday night.

The NHL’s Department of Player Safety made the announcement Thursday night after a hearing with the Jets’ scoring leader in the aftermath of Montreal’s 5-3 win. The hearing was conducted by telephone so the maximum penalty Scheifele could’ve received was a five-game ban.

The six-foot-three, 207-pound Scheifele received a charging major and game misconduct on the play, which came with 57 seconds remaining in regulation.

Prior to the suspension being handed down, Jets head coach Paul Maurice defended Scheifele’s hit, saying it was “clean.”

“For me the feet are on the ice, the arms are tucked in and it’s a body contact,” he told reporters during a videoconference. “That’s the way I see it.”

Evans, who turned 25 on Wednesday, had just completed the wraparound into the empty net with 57 seconds remaining. But before the six-foot, 183-pound Evans could celebrate, he was levelled by Scheifele, who delivered the harsh blow with his right arm tucked into his body.

Evans fell hard to the ice, the right side of his head hitting first. As a skirmish ensued, Winnipeg forward Nikolaj Ehlers used his body to shield the fallen Evans from those who were fighting.

Evans remained down for about eight minutes before leaving the ice on a stretcher.

“You need to do everything you can to stop a goal from being scored,” Maurice said. “It was a heavy, heavy hit for sure but it was clean.

“He (Scheifele) is a big, strong, powerful man that can skate. In order to try and cut that play off, he was skating pretty good. He wasn’t striding through the hit by any means. It was a hell of a hit, it was hard. Good on Evans, he took the hit to make the play. I didn’t have to bring in Oprah or Dr. Phil to sit down with Mark to see how he’s feeling (Thursday morning).”

Evans wasn’t taken to hospital but Montreal interim coach Dominique Ducharme said Thursday that Evans had suffered a concussion. In 2018, Evans was hit during a rookie showcase game, taken off the ice on a stretcher to hospital, and put in concussion protocol.

“Any concussion you can be worried about,” Ducharme told reporters. “Obviously you can have one and sometimes it’s one too many.

“You never want to see that.”

Evans won’t play Friday night and is out indefinitely.

It marked the second straight North Division playoff opener in which a player suffered a concussion and had to be taken off on a stretcher. Toronto Maple Leafs captain John Tavares took a knee to the head from Montreal’s Corey Perry n Game 1 of a North semifinal.

“It just seemed so unnecessary,” he said. “Everyone kind of knew he was going to score the goal, it didn’t really seem like he made much of an effort to stop the goal.

“You see your teammate and friend lying on the ice like that, it’s a terrible feeling.”

The loss of Scheifele is big for Winnipeg. He was the club’s scoring leader with 63 points (21 goals, 42 assists) in 56 regular-season games with just 12 penalty minutes.

The 28-year-old native of Kitchener, Ont., has two goals and three assists in five playoff games so far this year. He’s currently tied with Kyle Connor, Blake Wheeler and Josh Morrissey for the team scoring lead.

“We’re going to play them the same way as if he was in the lineup,” he said. “Pressure them hard, take away their time.

“We’re going to approach the game the same way and focus on what we need to do.”

Byron and Petry say the best redemption Montreal can gain on Winnipeg is to win the series, not exact revenge upon individual Jets players.

“The best way for us to respond is to win hockey games so Jake can come back,” Byron said. “He’s been playing great for us.

“Again (he) made a great effort on the goal to chase it down and put it the net and finish the game for us. We need to win hockey games so he can come back and keep playing well for us.”

Added Petry: “The best way to get back at them for that is to win the series. Our focus is to make sure we’re playing the right way . . . and make them pay that way.”

Byron, too, has been on the receiving end NHL justice. He received a three-game suspension in January 2019 for a hit on Florida defenceman MacKenzie Weegar during a game.

“My own feelings were obviously regret,” he said. “I don’t think you ever consciously go in to hit a guy to hurt someone but at the same time you have to own up to your actions.

“You’re responsible, it doesn’t matter if a guy is in a vulnerable position or not. At the end of the day you control your actions, you control what you do, how you finish your checks . . . you have to own up what you do and be responsible and take accountability for it.”

“I know he’s going down there to finish a check,” Byron said. “I think his reaction immediately was knowing that he made a mistake.

But Winnipeg defenceman Neal Pionk said often players have a split-second to react on the ice.

“It’s an intense game, it’s a fast game and I don’t think anyone on our team is targeting guys or certainly not trying to hurt guys,” he said. “It’s tough but you do everything you can to keep your elbows down and keep hour shoulder low and make sure you don’t make contact with his head.”

Jets forward Andrew Copp said he and his teammates are glad Evans’s injuries weren’t more serious. But he’s unconcerned about potential retribution from the Canadiens.

“We have to find a way to win the next game,” he said. “I think that’s all