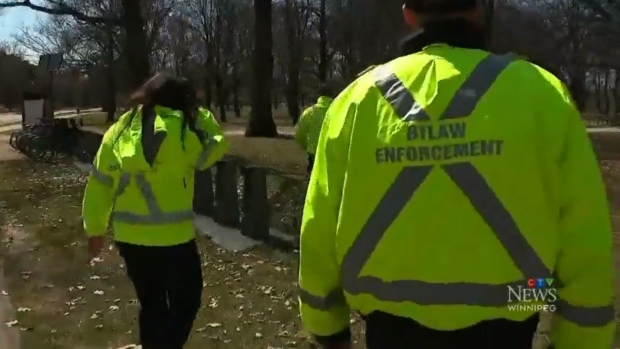 WINNIPEG — Winnipeg’s mayor wants to see the province crack down with harsher penalties for those openly and deliberately violating public health orders, as complaints to 311 of health order violations nearly doubled this month.

A spokesperson for the City of Winnipeg said 311 has been taking calls for complaints about compliance and enforcement of health orders since April 2020.

So far in May, the city has received 1,168 calls to 311 about compliance and enforcement – nearly double the total number of calls received in April (605).

May 2021 has seen the highest number of calls to 311 per month in the pandemic.

Jay Shaw, the manager of Winnipeg’s emergency operations centre, attributed the spike in calls to the public health orders put in place on May 9.

“If it is enforcement or someone wanting to report a possible infraction or violation of the public health orders, that call is then triaged and transferred to the appropriate agency,” he said.

On Wednesday, the city announced it has added four more by-law enforcement officers dedicated to COVID-19 enforcement, for a total of nine officers.

Winnipeg Mayor Brian Bowman said he would like to see the province crack down with harsher penalties for those violating health orders.

“The one thing that would help I would hope reduce the number of complaints regarding compliance with the provincial public health orders is if the fines were significantly strengthened,” Bowman said.

In early May, the premier announced the province would be doubling the fines for repeat offenders who violate the health orders.

Manitobans can face a $298 fine for not wearing a mask in a public place, a $1,296 fine for failing to comply with emergency orders, and a $5,000 for corporations disobeying the rules.

Bowman said he would like to see the province take the enforcement a step further.

“What we would like to see is significantly increasing the fines for first-time offences, so that message is very clear, that there will be significant financial implications of violating the province’s public health orders,” he said.

“I think that would go a long way to send that message to folks who openly and deliberately are choosing to violate the province’s public health orders.”

Bowman said he hopes this would lower the number of calls to 311 as well.

Along with this, the city said starting on Wednesday it is redeploying more than 100 staff from shuttered community services to work as community safety ambassadors in city parks.

This comes after the city closed some community services due to public health orders, which affected 360 temporary part-time staff. The city said, of these staff, 129 will be redeployed as community safety ambassadors.

They will be out and about in Assiniboine, St. Vital, and Kildonan parks, reminding patrons of the COVID-19 health orders.

The city asked residents to call 311 regarding COVID-19 health orders enforcement and compliance.

There are about 40 community services staff who have been redeployed to Public Works to help pick up litter around the city, including along river walks, pathways, sidewalks, in parks and back lanes. The city said they will also remove invasive plant species in parks and maintain trails.

A spokesperson for the city told CTV News about 170 staff have chosen not to be redeployed, opting for a voluntary temporary layoff.

-with files from CTV’s Daniel Halmarson