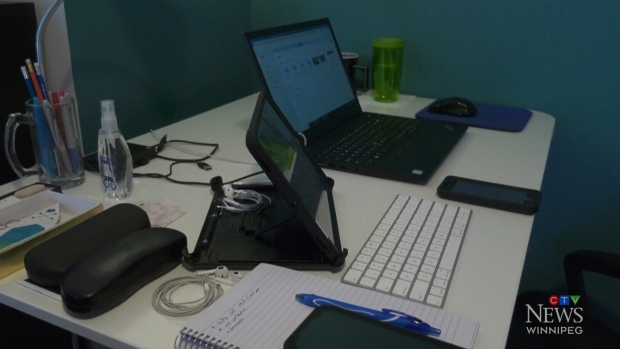 WINNIPEG — Offices are emptier, streets slightly less congested as scores of businesses have been forced to close putting millions of Canadians out of a job.

For many who are still employed, it’s where they’re working that looks a lot different now than it did one year ago.

Sam Stevenson works in public relations from either her living room or bedroom.

“It’s quite adaptable to be doing at home which I’m thankful for,” Stevenson said during a Zoom interview.

She started a new job during the pandemic and with the exception of one office visit, Stevenson only knows most of her coworkers from their weekly Zoom meeting.

It’s a dynamic brought on by COVID-19 that has thrown a new wrinkle at new hires.

Tory McNally, director of operations for a human resources consulting company, can relate. She only sees her boss on Zoom.

“We have never met in person, no,” said McNally, during a Zoom call with Legacy Bowes partner Barbara Bowes.

In fact, McNally has met just one of approximately 30 colleagues in person since starting work last month with the company.

McNally had a virtual orientation and a package of work materials, including a laptop, delivered to her home office. She enjoys the flexibility of it but has missed getting to know the workplace culture in person.

“When you go into an office and sit in a cubicle you can kind of feel the vibe of the office,” said McNally.

Workplace culture is something she feels is important for companies to talk about with their remote workforce.

Last month the number of Canadians working from home increased by 700, 000, according to Statistics Canada. Growth that pushed the country’s total home-based workforce to 5.4 million up from a previous high of 5.1 million in April.

Bowes, a human resources specialist, expects the working-from-home trend will continue beyond the pandemic. Her company recently downsized to a smaller office and Bowes sees benefits for both workers and employers.

“So you can work anywhere, for anyone by doing it remotely,” said Bowes.

Stevenson said once health guidance permits, a balance of working from home and the office would be ideal.

“I do like the human interaction of being in an office with people,” she said.

Statistics Canada said a number of factors can influence how many people work from home. It said the big increase in January can be attributed to schools in Ontario and Quebec temporarily transitioning to remote learning.