Officers arrested dozens more people Saturday as protesters resumed their standoff with police as part of a ramped up crackdown on the “Freedom Convoy” demonstrations in Ottawa.

Ottawa police said they had made 47 arrests on Saturday, in addition to more than 100 on Friday. Police also said they’ve towed 53 vehicles since Friday.

A fourth straight weekend of protests began Saturday morning, granted on a much smaller scale than other demonstrations seen in past weeks, while authorities appeared to take a more aggressive stance.

Police cleared Wellington Street in front of Parliament Hill of protesters for the first time since the demonstration began on Jan. 28. As officers began moving into the downtown core on Friday, several vehicles left Wellington Street, Kent Street and other jurisdictions.

During a press conference Saturday afternoon, interim Ottawa Police Chief Steve Bell said in total, 170 arrests have been made.

However, Bell couldn’t give a time estimate as to when Ottawa residents would have their streets back.

“We are working with our partners and we will remove these protesters peacefully from your area. This operation is still moving forward. It is not over and it will take takes up more time until we have achieved our goals,” Bell said.

Ottawa police said they have collaborated with law enforcement in Gatineau to close the Chaudières Bridge that connects the two cities in an effort to “prevent an influx of protesters.” They also set up about 100 checkpoints around the downtown core to prevent anyone from entering save for those who work, live or have a “lawful reason” to be there.

Officers have used pepper spray, and Bell confirmed they now have batons and helmets for added protection. Crowds have been pushing back against police, shouting “shame,” “freedom” and “hold the line.”

Smoke has also been seen at various points during the standoff and police have accused protesters of launching gas.

“We told you to leave. We gave you time to leave. We were slow and methodical, yet you were assaultive and aggressive with officers and the horses,” the Ottawa Police Service said in a message Saturday morning to protesters.

Ottawa police say officers arrested protesters who had smoke grenades, as well as fireworks, and were wearing body armour.

The conflict between the police and protesters continued to escalate into Saturday evening as police reported some demonstrators had assaulted officers with weapons. In response to these actions, officers deployed the use of ARWENs, which are a brand of riot guns commonly used to shoot “less lethal” munitions, such as rubber bullets and chemical agents.

There were also videos circulated on social media depicting protesters being knocked to the ground by police horses on Friday. Police also were seen smashing a truck window as they pushed forward.

However, Bell defended the tactics used by Ottawa police when asked about concerns that officers may have used excessive force.

“We will have the opportunity to review all of those files that are complaint mechanisms for people to enter into if they feel that there is excessive use of force by members of police,” he said.

Although there were fewer children seen at the protest site Saturday, Ottawa police say protesters are continuing to bring their kids.

Children are prohibited from participating in the demonstrations, according to the Emergencies Act, which the federal government invoked on Monday, and police have accused protesters of putting kids in the way of law enforcement operations.

“This is dangerous and it’s putting young children at risk,” Bell said.

As of Saturday, the Children’s Aid Society of Ottawa says no child has been transferred into its care. 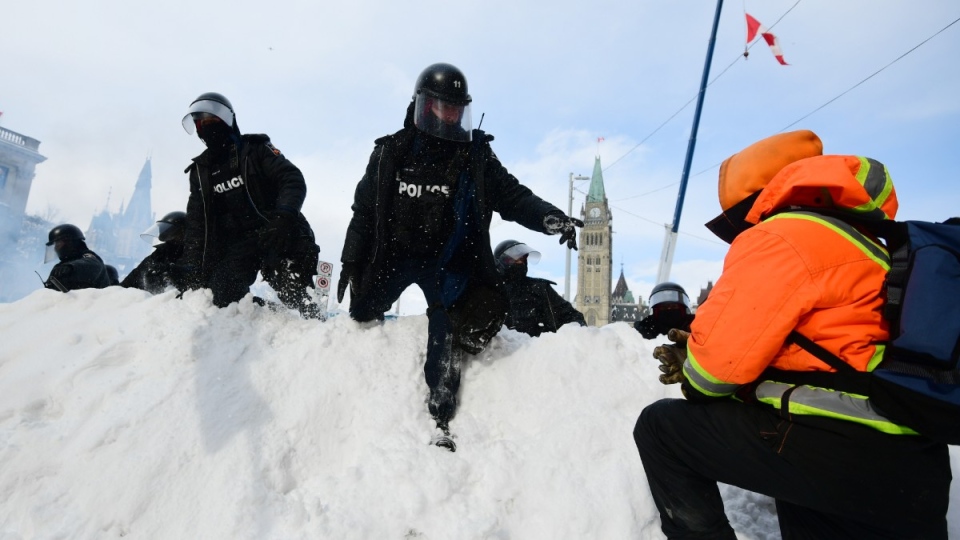 Police move in to clear downtown Ottawa near Parliament Hill of protesters after weeks of demonstrations on Feb. 19, 2022. THE CANADIAN PRESS/Justin Tang

PARLIAMENTARY PRECINCT IN ‘HOLD AND SECURE’

After shutting down on Friday due to security concerns, the House of Commons resumed debate on the motion for confirmation of the declaration of emergency Saturday morning, with a vote scheduled for Monday at 8 p.m.

As the major police operation continued to move down Wellington Street, it was announced that the parliamentary precinct was in a “hold and secure” position that meant doors were locked and access was interrupted for some. MPs were “strongly advised” against leaving the West Block, and those who were not already inside were suggested to avoid the area.

In a virtual press conference Saturday, Public Safety Minister Marco Mendicino said “at least 76” financial accounts have been frozen since the Emergencies Act was invoked on Monday. More than $3 million in funds was affected by those actions, he said.

“I think we’re all relieved that there has been a very minimum amount of confrontation and violence, and we hope that will continue to be the case going forward,” Mendicino said.

The federal government also announced that it is making up to $20 million available for downtown Ottawa businesses that have been adversely affected by the protest, with individual small businesses able to apply for up to $10,000 each in relief.

However, the government’s invocation of the Emergencies Act has been met with opposition from the federal Conservatives, as well as Alberta Premier Jason Kenney.

Kenney said on Saturday that Alberta will challenge the invocation of the Act in court, saying that it violates “natural justice.”

“The federal government’s invocation of the Emergencies Act is an unnecessary and disproportionate measure that can violate civil liberties, invades provincial jurisdiction, and creates a very dangerous precedent for the future,” Kenney said in a video posted to social media.

However, a letter obtained Saturday by CTV’s Evan Solomon revealed that Kenney’s government had asked for help from the federal government when convoy protesters blocked the U.S. border crossing in Coutts, Alta.

Among those arrested are four key organizers of the trucker convoy protest, including Pat King, Daniel Bulford, Chris Barber and Tamara Lich.

King is the latest person to have charges announced after broadcasting his arrest live on Facebook.

Bulford, a former RCMP officer, turned himself in near the Fairmont Chateau Laurier hotel on Friday. However, charges have not been formally announced.

Charges against Barber and Lich were announced early Friday morning after they were arrested Thursday.

An Ontario judge granted bail to Barber and released him on a $100,000 bond, on the condition he leave Ontario by Feb. 23, not publicly endorse the convoy or have any contact with other major protest organizers.

Lich appeared in-person at her bail hearing Saturday. She testified that she wants to return to Alberta to be with her husband and kids, and pledged a $5,000 bond, saying it was all she could afford.

Lich is charged with a single count of counselling to commit mischief. She promised to leave Ottawa by vehicle and give up her advocacy of the protest, but would need several days to make those arrangements. Lich cited not having the required vaccine passport that would allow her to fly and the freezing of her bank accounts as reasons.

A judge decided to wait until Tuesday before deciding whether to grant Lich bail, meaning she will return to a local detention centre until then.

Ontario courts are closed this Monday because of the Family Day holiday. None of the charges against any of the organizers has been proven in court.

Protesters have made a number of demands throughout the three weeks of demonstrations in Ottawa.

Many wish to see the end to pandemic restrictions and vaccine mandates, including one from the federal government for cross-border truckers, while others have called for the ouster of the Liberal government.

The parking of vehicles downtown and the blaring of truck horns have proved disruptive for local residents and businesses, leading to a proposed class-action lawsuit and court injunctions in an attempt to stem the noise.

The protests also have inspired border blockades across Canada and other demonstrations around the world.

In British Columbia, the Canada Border Services Agency announced Saturday the Pacific Highway border crossing in Surrey, B.C. was experiencing severe disruption due to “increased protest activity.” The CBSA says the Pacific Highway port of entry remains open, however it advises travelers to use an alternative processing site.

Thousands of demonstrators have gathered in Quebec City, where officials say they made three arrests as of Saturday afternoon.

In Toronto, police have closed a large portion of downtown in case another convoy protest enters the city. Protesters rallied in front of the provincial legislature without vehicles and police said gathering had been peaceful.

Another protest took palce in Edmonton on Saturday, and police stopped a convoy of dozens of vehicles Saturday north of the Regway border crossing in Saskatchewan, allowing only groups of 10 through.

With files from CTV News and The Canadian Press

(295)
$9.99 (as of May 20, 2022 11:25 GMT -05:00 - More infoProduct prices and availability are accurate as of the date/time indicated and are subject to change. Any price and availability information displayed on [relevant Amazon Site(s), as applicable] at the time of purchase will apply to the purchase of this product.)

(760)
$25.99 (as of May 20, 2022 11:25 GMT -05:00 - More infoProduct prices and availability are accurate as of the date/time indicated and are subject to change. Any price and availability information displayed on [relevant Amazon Site(s), as applicable] at the time of purchase will apply to the purchase of this product.)

(1163)
$0.99 (as of May 20, 2022 11:25 GMT -05:00 - More infoProduct prices and availability are accurate as of the date/time indicated and are subject to change. Any price and availability information displayed on [relevant Amazon Site(s), as applicable] at the time of purchase will apply to the purchase of this product.)

(3533)
$11.14 (as of May 20, 2022 11:25 GMT -05:00 - More infoProduct prices and availability are accurate as of the date/time indicated and are subject to change. Any price and availability information displayed on [relevant Amazon Site(s), as applicable] at the time of purchase will apply to the purchase of this product.)

(142)
$43.95 (as of May 20, 2022 11:25 GMT -05:00 - More infoProduct prices and availability are accurate as of the date/time indicated and are subject to change. Any price and availability information displayed on [relevant Amazon Site(s), as applicable] at the time of purchase will apply to the purchase of this product.)