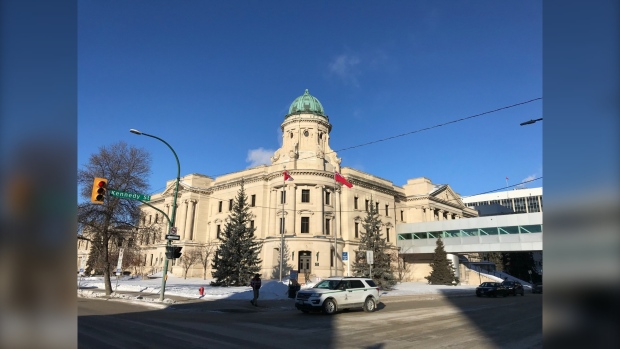 WINNIPEG — Video evidence played in the trial of Winnipeg police officer Sean Cassidy shows the arrest where a man alleges he was assaulted, but defence counsel says the video doesn’t clearly show what the man was or was not doing.

Cassidy is facing one count of assault causing bodily harm in connection to an arrest in Winnipeg in the early morning hours of March 28, 2017.

The charge has not been proven in court. Cassidy has pleaded not guilty.

In his testimony on Monday, Jamie Cote alleges he was punched and kneed in the face during the arrest by a person not in uniform.

The video shows a truck driving north on St. Mary’s Road, followed by a minivan. The video shows the truck pass a parking lot where a Winnipeg police cruiser car is sitting, and pull over to the side of the road.

It shows the minivan and police cruiser pull in behind the truck as the driver gets out.

The video footage shows three people – two from the police cruiser and one from the minivan – get out and approach the truck from behind.

The video zooms out, and the next time it zooms in, it shows the truck’s driver on the ground with two people who appear to be on top of them. The passenger of the vehicle is also seen in the video on the ground on the other side of the truck with a person beside them.

Rob Tighe, an officer with the Winnipeg Police Service who trains officers on how to conduct high-risk vehicle stops, told the court on Friday the Air1 video does not show a textbook stop.

He said officers are trained to have two marked cruisers with four uniformed officers on the scene before initiating the stop.

He said high-risk stop protocols include asking the driver to open their door or window, remove the keys from the ignition and place them outside the vehicle.

Tighe said officers are trained to command the driver to get out of the vehicle, show that they do not have any weapons and then walk backwards towards the cruisers where they are placed in handcuffs.

He said the training is for the ideal circumstances – which can change.

“The suspect’s actions are going to dictate the way the officers react,” Tighe said, adding he was not on the scene the night of the incident.

“Given you were not there and you didn’t have the information that they had, nor could you have observed what they are observing – you are not in a position to critique whether the tactics were appropriate or not,” defence counsel Lisa LaBossiere said in her cross-examination of Tighe.

Tighe agreed, saying he is only able to comment if the video shows what appears to be a high-risk stop or not.

“I’m going to suggest to you, looking at the view point, given what you saw, you weren’t able to see very well the driver’s side of the vehicle,” LaBossiere said. “You can’t see what exactly the driver was doing or not doing.”