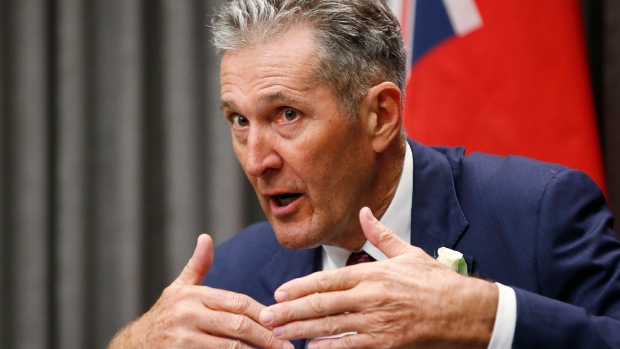 WINNIPEG — Premier Brian Pallister is calling on the United States government to provide millions of unused vaccines to Canada.

Manitoba’s premier said the current border closure should not prevent vaccines from being sent north.

He said premiers and governors have been working to send vaccines from the United States to Canada but the White House and President Joe Biden are standing in the way and preventing that from happening.

“Our vaccine team has assured me that they could vaccinate an additional 100,000 Manitobans in the next tens days if we had the vaccines here,” said Pallister.

Pallister added trucks with freezers are ready to head to the United States and pick up vaccines and they would be ready to go in Manitobans arms by Sunday.

“The best way to beat back the third wave is vaccines. Vaccines are the key. Thus far, President Biden has said, ‘No,’ I say, ‘Let’s go Joe.’ The right answer is yes. We need your help and we need it now.”

Pallister said every premier and governor along the border wants to renew their economic and social relationships but that can’t happen until COVID-19 is beaten.

“We need this resolved. We need to ensure that our border is used to keep COVID out but it is never used to keep a vaccine out.”

Pallister said in his conversation with Prime Minister Justin Trudeau on Friday that he supports what the provinces are calling for and would also like to see the unused doses come to Canada.

“I appreciated that support. Now we need that support to be communicated in every way possible, down to the White House to get Joe Biden to say yes to this arrangement.”

Pallister noted the province has corresponded with U.S. governors to weigh in on the subject and get Biden to agree to send vaccines.

He added these vaccines are even more crucial now considering the province learned there would be a reduced number of vaccines coming in the next few weeks.

“Governors and premiers, I think, are unanimous on wanting to get vaccines from the United States that are not in demand, that are being stored there, up into Canada arms.”

Pallister said he hopes other premiers will step up and share a similar message, adding the quicker Canadians can be vaccinated, the quicker the relationship with the United States can once again resume.