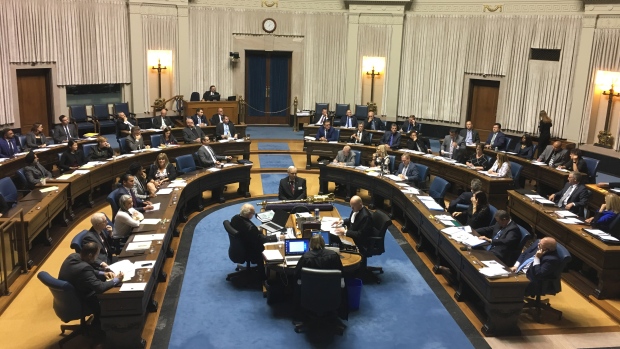 The Pallister government is exploring the possibility of selling Manitoba’s Amphibex machines.

A Request for Information issued on September 18 states it’s seeking ideas and recommendations for a new delivery model for the ice jam mitigation program, which includes annual ice cutting and breaking activities in February and March.

The RFI also states that because the program’s equipment is only used for part of the year, there is an opportunity for an entity to pursue activities when the program is inactive.

The RFI indicates that submissions could include leasing three Amphibex machines, revenue sharing for off season work, and divestment of the amphibexes, which could include their sale to another service provider.

In the Legislature Monday, NDP Leader Wab Kinew asked Premier Brian Pallister why the government was looking to sell the machines.

Kinew said not having them could put communities at risk.

Amphibexes are used to protect the communities of St. Clements, St. Andrews and Selkirk, said Kinew.

He added the machines represent an innovation to protect against climate change.

Pallister responded by saying the government is investing hundreds of millions of dollars in flood protection and raised the importance to prioritize.

Minister Ron Schuler said in a scrum there are no plans to abandon the ice cutting program.

Schuler said the RFI is going out to test the market.

He said every year the machines cut about 28 kilometres of ice.