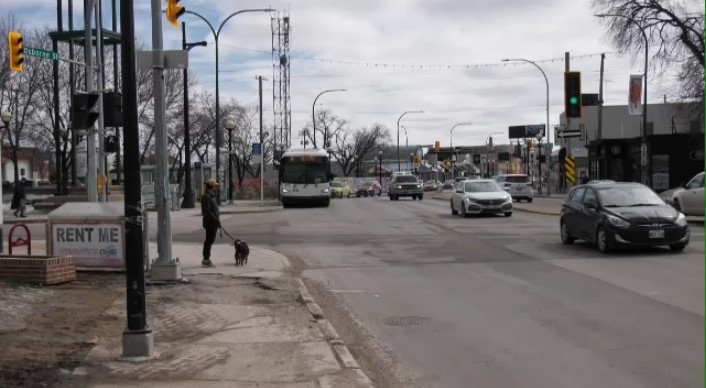 Once one of Winnipeg’s busiest neighbourhoods, Osborne Village was hit hard by the pandemic, but the local business improvement zone says it’s back to its old ways.

Opening in 2013, Pinky’s Bakeshop has experienced the challenges of Osborne Village firsthand.

The small bakery’s owner says rent has increased by about 60 per cent since opening.

“It’s tough here, like for rent I feel like it’s very high for the amount of foot traffic that we’re getting,” says owner Phingky Fuentes.

Down the road at Sous Sol, general manager Scott Redfern said the restaurant has felt the pinch during the pandemic too.

Sous Sol was forced to stop in-person dining and had to get creative to earn any money amid the COVID-19 pandemic.

Despite the hardships, Redfern claims the pandemic-bruised businesses in the village are feeling a little more optimistic lately.

“The lifting of the different regulations and mandates, we’re definitely able to get that foot traffic a lot more because people feel safer and they’re feeling more open to going to places in person,” he said.

According to Osborne Village BIZ, there have been eight closures in the area since March 2020 — a number it says is less than people think.

“We have most of our buildings filled with businesses,” said Lindsay Somers, the BIZ’s executive director.

According to Somers, 17 new businesses have opened in the neighbourhood in the same period.

Osborne Village BIZ is using events like its Earth Day cleanup to keep the stretch of businesses moving in a positive post-pandemic direction.

“Osborne Village BIZ is really focusing on rebuilding, revitalizing and energizing the neighbourhood this year where we’re working to build connections between businesses, our residents, and our community,” Somers said.

Somers said the BIZ is looking forward to two major apartment developments that will increase the population and create new retail opportunities in the near future.

But for the current businesses — support right now is vital.

“The people come first, and then the businesses are going to start reopening and doing that kind of stuff, and so we’re just incredibly grateful for everyone who comes and supports all the different local businesses,” said Redfern.