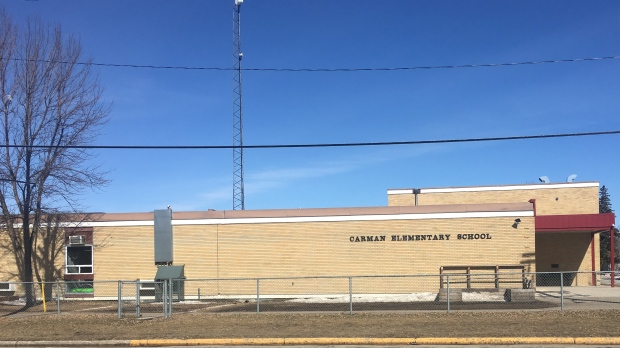 The Prairie Rose School Division is investigating after an incident in the boys bathroom reportedly prompted a staff member to ask students to show their underwear at Carman Elementary School.

On Friday the principal of the school sent home a letter to parents and guardians, that the school division provided to CTV News, which stated most boys in Grades 4 and 5 had been involved in the incident.

“I recently became aware that as part of an investigation into a boys’ bathroom incident, a staff person asked Grade 4 and 5 male students to show their elastic underwear waist band above their pant waist for the purpose of ascertaining which child or children were involved in the incident,” said Cecile Affleck in the letter.

“Please be aware that the request of the staff person was not intended to be salacious nor exploitive. The action, however, was not done according to our investigative methods for matters of this nature.”

Robert Fidler, 11, is in Grade 5. He said the incident happened about two weeks ago. At the time, he said the staff person came into his class and told the room a toilet was clogged with underwear. The staff person then asked the boys to line up by the door and were taken to the library and asked to show the top part of their underwear.

“I was embarrassed,” he said.

His mother Sandra said she only learned of the incident on social media and never received the letter that was sent home.

“I wish they had done things differently,” she said.

Alyssa Selman’s son was also asked to show his underwear.

Selman said although the division could have addressed the issue sooner with parents, she believes the school division will handle the incident properly.

In a statement to CTV News, school division superintendent Terry Osiowy said the investigative actions applied to this incident did not follow respectful investigative methods.

Manitoba RCMP said Monday it’s aware of the incident and have been in contact with the school board.

“At this time the RCMP is not investigating,” police said in an email to CTV News.

The letter sent on Friday also said that due to the sensitive nature of the request made upon the students, it was important to address this issue directly with the students.

It said the guidance counsellor and principal spoke to all Grade 4 and 5 classrooms and gave a personal safety message with the following points:

– It is not okay for an adult to ask a child to show their underwear;

– The children did nothing wrong whether or not they complied;

– The job of the school staff is to keep kids safe.

The letter also encourages students to talk to parents or guardians about the incident and said further resources can be accessed on the Canadian Centre for Child Protection’s website: https://protectchildren.ca/en/.