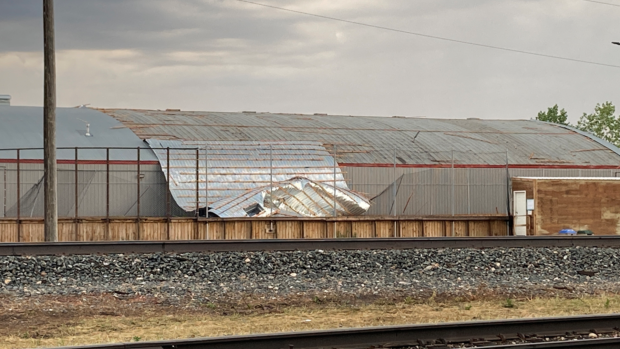 Many areas were under severe thunderstorm warnings and watches over the course of the evening, with some areas still dealing with stormy conditions as of Saturday at 10:30 p.m.

Environment and Climate Change Canada said conditions are favourable for the development of dangerous thunderstorms that may be capable of producing damaging wind gusts, large hail, and heavy rain.

In Niverville, it appears the storm was strong enough to cause damage to the arena. Portions of the roof were ripped off, and emergency crews could be seen in the area.

Environment Canada confirmed to CTV News no tornadoes had touched down as of Saturday evening, though there were very strong winds in many areas. In Menisino, winds gusted up to 111 kilometres per hour. In St-Pierre-Jolys, winds reached 107 kilometres per hour, and 104 in Emerson.

As of 11 p.m. Manitoba Hydro was reporting more than 10,000 customers were affected by power outages, the majority of which are weather-related.

Environment Canada said the storm is tracking towards the Ontario border, where more warnings are in effect.

Much of southern Manitoba has also been blanketed by a heat warning, however conditions are expected to improve by Sunday.