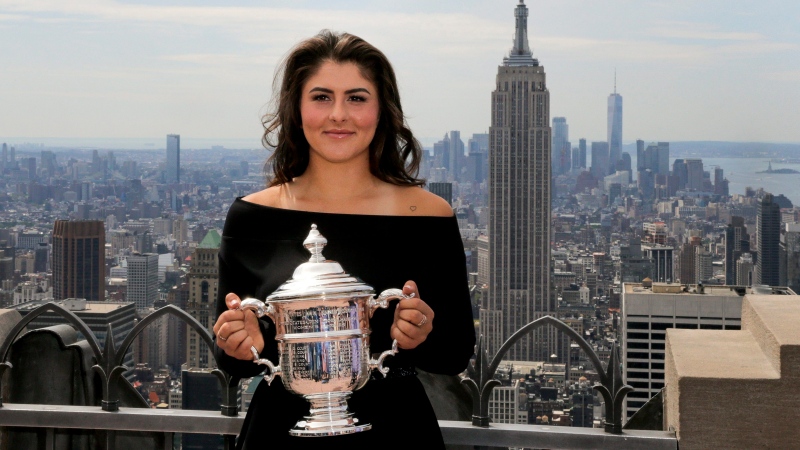 Tennis superstar Bianca Andreescu thinks it “would be so crazy” if Toronto and her Ontario hometown held parades for her but she’d be open to both. She also said Drake had apologized for not reaching out earlier.

She made the comments to reporters during her first appearance in Canada on Wednesday at the Aviva Centre at York University, after a whirlwind victory lap in the United States after beating Serena Williams and winning the U.S. Open.

Andreescu said she hasn’t spoken directly to Toronto Mayor John Tory or Mississauga, Ont. Mayor Bonnie Crombie — who’ve both said Andreescu could have parades in their cities if she wanted.

“Damn. If that happens, That would be so crazy. I was not expecting anything,” she said in regards to Crombie wanting to roll out the red carpet.

Crombie has said her city hopes to have a rally, give Andreescu the key to the city and potentially name a street after her.

The push for a parade started after the hashtag SheTheNorth — which echoed the Toronto Raptors’ #WeTheNorth — went viral after her U.S. Open victory, with many arguing she should command the same type of attention as the NBA Championship-winning team.

“It’s crazy, I wasn’t expecting any of this,” she said in response to having inspired a hashtag. “I’ve gotten phone calls of people going crazy in Toronto.”

DRAKE APOLOGIZES FOR NOT SENDING PRAISE

She also said that Drake apologized for not sending her praise shortly after her win. During the press conference, Andreescu laughed as she read messages from Drake who said he thought “liking” her social media posts was enough.

She said he’d texted her: “Here I am :). Congrats we are all so proud of you. I’ve been liking every post with you in it LOL. I thought you’d see.”

During her appearances on the U.S. talk-show circuit, she had jokingly called out the Canadian rapper and Toronto Raptors global ambassador for not paying homage to her win.

Other Canadians such as Prime Minister Justin Trudeau and former NBA player Steve Nash have publicly congratulated Andreescu but apparently not the Grammy-award-winning rapper.

“Drizzy. Champagne Papi, I’m waiting for you,” she joked with Jimmy Fallon on his late-night show, after the host asked her who she hasn’t heard from.

Andreescu said she’s been adjusting to her newfound fame and that her “first stop” after returning to Canada was Toronto’s Yorkdale Mall. She laughed, “I’ve been getting more recognized than usual.”

During the press conference, she was even asked about who should play her in a movie. She said actor Jennifer Lawrence has the OK to play her if a biopic is ever made about her.

“I feel we have a similar vibe,” she laughed.

The 19-year-old, who is now Canada’s first-ever Grand Slam champion, also addressed her nerves on the court on Saturday.

She said she overcame the pressure, and the 20,000 fans in the area who were mostly cheering for Williams, because she’s “been preparing mentally for this for a pretty long time.”

Following a post-game interview, she seemed to give what some deemed a very “Canadian” answer after she was asked obstacle had been the hardest to overcome.

She then turned to the crowd that had formed behind her on the ESPN dais and threw her hands up.

“I know you guys wanted Serena to win, so I’m so sorry!” she yelled out jokingly. That’s when Twitter erupted with praise.

On Monday, she dramatically shot up to No. 5 in the WTA Tour’s world rankings but told reporters that “I’d want to crack the top three.”

SPOTLIGHT ON MOM’S POISE DURING MATCHES

Despite most of the spotlight shining on Andreescu, some of that attention has been given to her mother, Maria.

The chief compliance officer at an investment firm has been regularly seen in the stands, wearing large sunglasses and clapping coolly during her daughter’s matches.

During the press conference, she said her mom “deserved some applause” for becoming the subject of articles online. She attributes her mantra of “dream big to get big” to her mother.

But some had tweeted that she appeared too calm during her daughter’s victories including model Chrissy Teigen, who tweeted, “Bianca’s mom looks like someone is pretending to be Bianca’s mom. Someone check on Bianca’s mom!!” However, others were quick to criticize the tweet and defend Andreescu’s mother.

Although she didn’t address Teigen, Andrescu laughed at people loving her mom’s behaviour, tweeting, “This is actually hilarious. My mom’s a straight G. I’ll never be that cool.”

COMING DOWN OFF THE HIGH

During the press conference, she said she wants to be an inspiration to “many people.” and hopefully leads to young ones “to pick up a racket.” Andreescu added that it “pretty cool” to hear from people starting to watch and play tennis because of her.

As for what’s next, Andreescu’s coach said the team plans on getting right back to work.

Sylvain Bruneau, her full-time coach since 2018, has said she’ll resume her training next week with their sights set on playing in the Beijing Open in late September — one of the tournament during the WTA Tour’s Asian swing.

“This is the start of what she says she wants to be able to accomplish, so if it’s only the start (that means) you’re nowhere close to where you want to go or where you want to be, you’re just going in the right direction,” he told reporters in Montreal on Monday.

“If this is your mentality, then back to work,” he said, adding that Andreescu’s victory lap is well-deserved and will help her come down off the high of winning so she’ll be ready to begin training.

And a rally and Keys to the city too! Let’s lock down the timing….

Personally I feel this is pretty low to make fun of this young girl’s mother. She may be shy, she may be reserved, she may be terrified of the spot light. What ever, I thought we were supposed to be teaching people to be inclusive & not make fun of others.

Disappointing tweet. Shes a successful woman and mother who supported her daughter’s dreams. Look her up. Disappointing coming from you.

This is actually hilarious. My moms a straight G. I’ll never be that cool https://t.co/4pvXVf5ZXv