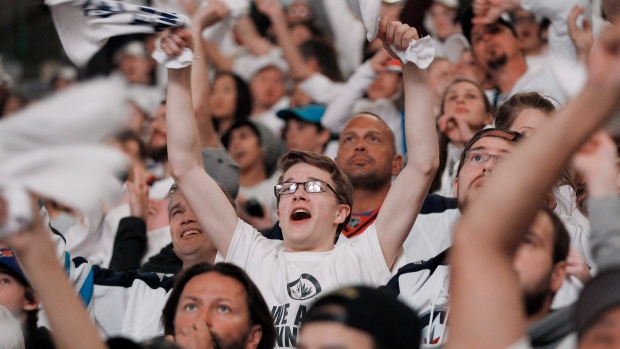 WINNIPEG — Manitoba Premier Brian Pallister said there are plans in place to have fans in the stands for the Winnipeg Jets’ next playoff game.

During a news conference on Tuesday, Pallister said there will be a small number of fans at the next game. He said he knows the fans who attend will be safe, careful and follow public health rules.

“I think we should take that as a sign of some small amount of optimism that we can start to get our lives back here in Manitoba,” Pallister said.

The province confirmed the news in an email to CTV News saying a limited number of fans will be at the game for the first time in over a year.

“More details will be announced soon, but the province is pleased that some very deserving Manitobans will be at Bell MTS Place as the Jets take on the Montreal Canadiens,” the province said.

On Twitter, The Winnipeg Jets confirmed the news, saying Bell MTS Place will host, “up to 500 fully vaccinated healthcare workers” for Games 1 and 2.”

In an email to CTV News early Tuesday morning, True North Sports and Entertainment said there have been ongoing discussions with the province and health officials about allowing fans.

“As part of our commitment to working with health officials, we have shared we have the ability, experience, and resources to open (Bell MTS Place) and Burton Cummings Theatre to fans when it is safe to do so,” True North said in an email.

The organization said it supports the province in any decision made.

The Winnipeg Jets will start their second round matchup on Wednesday against the Montreal Canadiens.

Of the teams remaining the Stanley Cup Playoffs, Winnipeg is the only city that has yet to have fans attend a game.