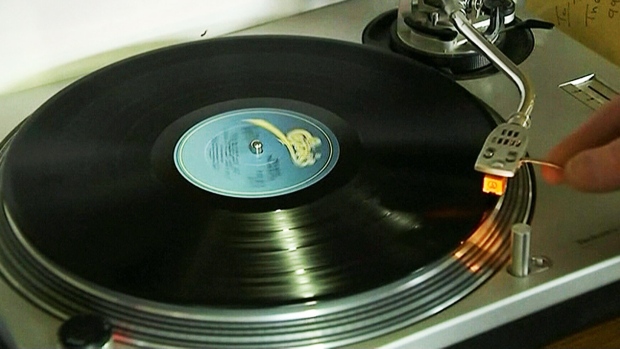 WINNIPEG — 2020 could be described as a difficult year for record store owners, and it is not just because of a global pandemic.

In February, one of only two plants in the world that make lacquer discs to create records burned down, causing supply chain issues and price increases for the format that is still being felt through the year.

And then the COVID-19 pandemic hit North America, resulting in the closure of non-essential businesses, and leading to a decline in sales.

However, record stores persevered, and by adapting their sales practices, and retaining the support of loyal customers, have managed to make the most of 2020, while looking ahead to 2021.

SIDE A: A YEAR NOBODY EXPECTED

Into The Music celebrated its 33rd anniversary in Winnipeg in 2020, but owner Greg Tonn said 2020 was a year unlike any he has experienced before.

While used records are the primary sales focus, the store in Winnipeg’s Exchange District also sells new vinyl, which has seen issues with the supply chain even before the pandemic.

On February 6, the Apollo Masters plant in Banning, Calif., burned down. According to the Los Angeles Times, the plant supplied an estimated 75 per cent of the lacquers used to create records and was one of only two plants in the world that did so (the other plant is located in Japan).

Tonn said this has caused issues from an ordering perspective.

“A lot of new titles are missing their release dates,” he said, citing Taylor Swift’s ‘Folklore’ as a recent example. “Then, once they run out of a pressing, it takes a long time, much longer than usual for them to re-press it and get it back into the supply chain.”

In the last several years, Tonn said he has noticed vinyl records have had their prices increase, and said the current delay in albums is also pushing the prices up due to demand. He said the more expensive a record is, the slower it sells.

“I worry constantly about a certain degree of sticker shock, and scaring people who’d potentially like to become record collectors out of the market because of how expensive it is,” he said. “I think it really should be something that everyone can enjoy. And they’re making it more and more, especially from the point of view of new sales, harder and harder to get into the marketplace without a solid middle-class income.”

The delay in new records arriving was one issue, but Tonn said the first announced lockdown in Manitoba in the spring had an impact on his business, saying sales were down 80 per cent compared to 2019.

The pandemic also impacted another record store in Winnipeg.

Old Gold Vintage Vinyl, located in Osborne Village, has been in business for two years, sharing a space with Urban Waves, and selling used vinyl.

“We were doing good,” said owner Brent Jackson. “I mean, there was a good energy, a good vibe there. You know, we were getting new customers all the time.”

When the first lockdown happened, Jackson said there was some decrease in sales, but when the store was able to reopen in the summer, he said customers came back strong.

“Everyone was loving it,” he said. “It was just a thriving, vital place.”

Both stores were able to be open with some capacity limits for the spring and summer but had to close in November due to the second lockdown of non-essential businesses.

SIDE B: CHANGING TUNES

Like other businesses, the record stores have had to adapt their business models to meet public health orders.

For Into the Music, that meant shifting to a primarily online model. Tonn said the store used its e-mail newsletter to list the new and used records that arrived in the store (as many as 300 a week), and began offering curbside pickup.

“That has really kept us hopping busy,” he said, adding the store is also doing special orders, and supply has started to stabilize in Canada.

The store employed seven employees before the lockdown, including Tonn, but had to lay off five people, he said.

For Old Gold, they also switched to an online model, putting albums and prices up on Instagram and Facebook, and doing curbside pickup. Jackson said while there has been some solid business, some of the customers have been cut off.

“The older folks, they don’t have smartphones or Instagram and stuff like that, they kind of rely on the old way of doing it, which is coming into your store,” he said. “I guess it kind of pigeon holes from collectors and shoppers, because they don’t, you know, maybe they don’t even know about us online.”

“So it’s kind of a challenge just to get your name out there and rebuild an online presence when, you know, the physical one could be strong, but that doesn’t really mean anything. Doors are locked and no one can come in.”

Jackson said there has also been a challenge in getting new music to sell, due to public health orders. While in the summer, he was able to do a lot of purchases on people’s porches, due to the winter and new rules about having people inside homes, it has been difficult in some cases.

Tonn said compared to the spring, business is down between 55 and 60 per cent compared to 2019, but he remains optimistic.

“I’m confident that we’ll come out of this lockdown and get back up to speed pretty quickly once we’re allowed (to reopen),” he said.

Jackson said he is hoping to be able to reopen his store in 2021.

Both Tonn and Jackson said they’re thankful for their customers who have helped them navigate a difficult year, and are hoping to bring the experience of shopping at a record store back sooner rather than later.

“They’ll wander through the bins, they’ll find something they weren’t thinking of, and didn’t know that they needed until they saw it,” said Tonn.

“It’s kind of like a therapeutic thing for people to come and look at music that they like,” Jackson said. “They like flipping through the records and touching things and, you know, seeing them with their own eye.”