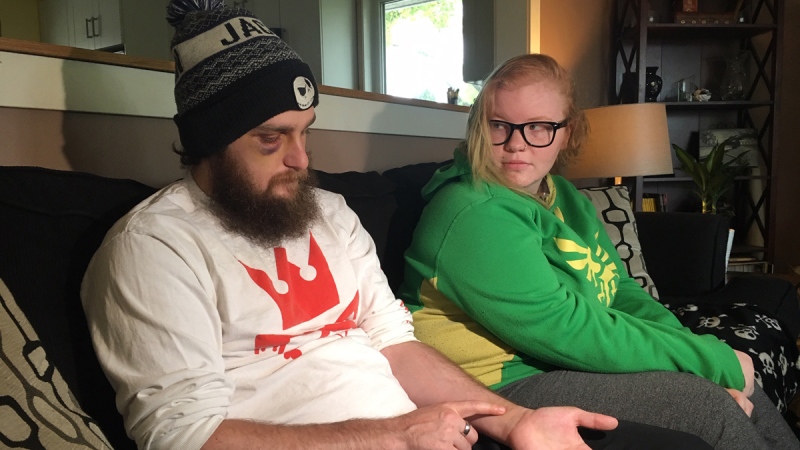 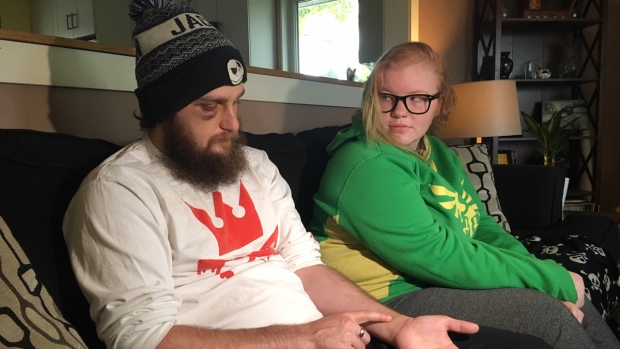 A Winnipeg couple is changing their work hours and vowing to take greater safety precautions downtown after an attack leaving work Monday night.

Devyn Cusson and Rebecca Tweed were walking to their vehicle towards Ellice Avenue on Carlton Street around 10 p.m. when two women and a man walking towards them asked them for the time.

Cusson said when he passed the group, he pulled out his phone and replied ‘10:07’. Then they asked for a lighter.

When Tweed replied no, the couple said one of the women swung at her. Cusson then stepped in to protect his girlfriend.

“The other two jumped me and it just went crazy,” said Cusson.

“One of the females had a large rock or pool ball in a sock, a black sock tied off on the end. And she was swinging it and she got me about seven times, three or four in the exact same spot,” said Tweed. “There was a rock, a brick-sized rock was brought in the fight too.”

Cusson was able to restrain one of the women until they said another suspect, a man, came up to them and started swinging a hammer, shortly before police arrived.

They said a man with the rock-like brick managed to get away, along with a woman who took Cusson’s phone.

Cusson has been left with a black eye, a wrist injury and a possible fractured rib. Tweed had a big bumped on the top of her head.

The couple said since they began working in the area in January, they’ve encountered problems with people outside.

On Friday, the couple said they returned to their workplace and the spot of the attack so they could help overcome what had happened and sort out their time off work with their employer.

Tweed said the pair has been offered to work earlier shifts, which she plans to do. She also said a phone has been set up in the HR area so employees can instantly be connected to the Safe Walk program with Downtown Biz.

The couple is vowing to use the service moving forward.

“This is a huge problem regardless of time of day,” said Tweed. “If it wasn’t us it would have been someone else.”

Winnipeg police have charged Kara Lisa Harper, 27, with robbery and possessing a weapon, and Michael Okemow, 31, with assault with a weapon.

None of the allegations have been tested in court.