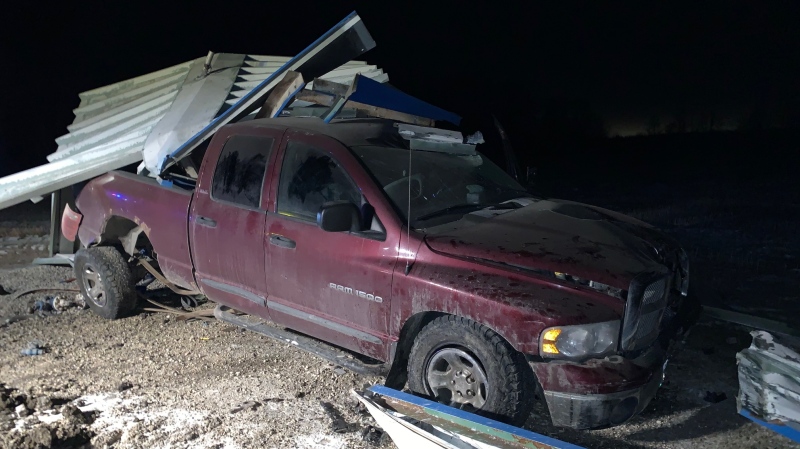 WINNIPEG – Manitoba RCMP said a truck that crashed into a natural gas station — leading to evacuations, a school closure, and gas and power outages — was later reported stolen.

Manitoba Hydro personnel are working to repair natural gas service in Tyndall, Man., northeast of Winnipeg, after the crash at around 9:15 p.m. Thursday led to an evacuation of ten homes in the area, gas service shut off for 250 customers and power to others.

RCMP said gas could be heard leaking after the crash, involving a pickup truck and a gas distribution station on Pierson Drive, and officers and firefighters had to stay back initially for safety reasons.

A transformer pole near the station, which Hydro said was destroyed, meant workers had to take extra caution.

“Any hint of ignition could have set the gas off,” Hydro said in a tweet.

Electricity was cut to the area as well, but said power was restored to around 50 customers just before 4 a.m.

The outage forced the closure of Gillis School.

As repairs continue, the school will stay closed all day Friday.

Hydro said a compressed natural gas trailer unit sent to Tyndall would act as a temporary supply while repairs were underway.

#mboutage We are also deploying our compressed natural gas (CNG) trailer unit as backup to supply temporary natural gas to the town as repairs continue at the damaged station.

More about the CNG unit at https://t.co/jdbbOuElmG

People allowed to return, told to have someone stay home

A notice from the R.M. of Brokenhead to residents posted online said people who were forced to leave their homes overnight can now return home. It asked people to try and have someone at the home because Hydro workers will be going door-to-door to relight gas systems.

If no one is home, RCMP will escort the worker in, and leave a notice.

It said people may smell gas near Gillis School because the system is being pressurized in that area.

RCMP said once the gas leak was under control and they were able to approach the truck, they found it was empty. It was later reported stolen. 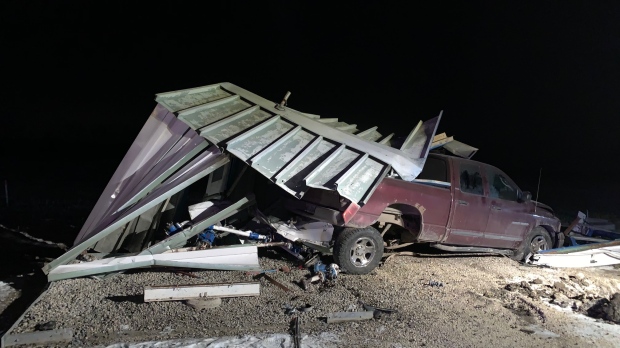 No injuries were reported, police said.

Investigators believe the truck was heading north on Road 35 East, also known as Pierson Drive, when it crossed a ditch and drive into a metal shed, rupturing a gas line.