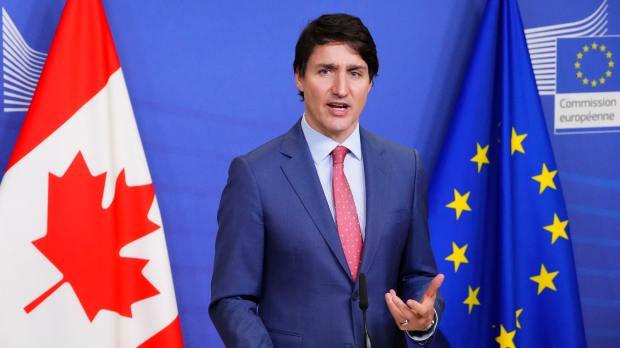 BRUSSELS — Prime Minister Justin Trudeau is meeting with his fellow NATO leaders at a special summit aimed at finding a path toward ending the fighting in Ukraine.

Russia’s invasion of Ukraine one month ago has left Europe facing its biggest security threat since the Second World War, and, Trudeau argued yesterday, a larger threat to the globe.

Arriving at the alliance’s glassed-in headquarters Thursday morning, Trudeau condemned what he calls the “illegal, brutal invasion of a friendly democracy.”

He says NATO is united in its condemnation of Russian President Vladimir Putin, and equally in its support for Ukrainians who, he says, are fighting for the values that underpin democracies.

Canada and its allies are expected to unveil later today a new round of economic sanctions against allies of Russian President Vladimir Putin.

Ukrainian President Volodymyr Zelenskyy is also scheduled to address NATO leaders after having spoken directly with Trudeau earlier this week.

NATO secretary-general Jens Stoltenberg says the military alliance is set to green light sending more troops to the eastern part of Europe as part of talks to reset the alliance’s long-term deterrence and defence posture.

Speaking to reporters ahead of the meeting, Stoltenberg said he also expected alliance members to accelerate defence spending to confront NATO’s most serious crisis in generations.

“We need to do more, therefore, we need to invest more,” he said. “There is a new sense of urgency. I expect that the leaders will agree to accelerate the investments on defence.”

The comments add to pressure on Trudeau’s government to boost Canada’s defence budget, which according to NATO estimates stands at 1.39 per cent of the country’s gross domestic product in 2021, below NATO’s two-per-cent goal.

On Wednesday, Defence Minister Anita Anand made no mention of aggressive spending options during testimony before a House of Commons committee, instead pointing to planned increases included in the government’s 2017 defence policy.

Even with those planned increases, the government projected it would fall short of NATO’s target.

“I will say that our government has been making critical smart investments into our forces,” she said, adding that spending increases are aimed at ensuring the military has “the right people, equipment, training and culture.”

This report by The Canadian Press was first published March 24, 2022.

Do you have both Ukrainian and Russian family members? How are you handling the crisis? Email dotcom@bellmedia.ca.