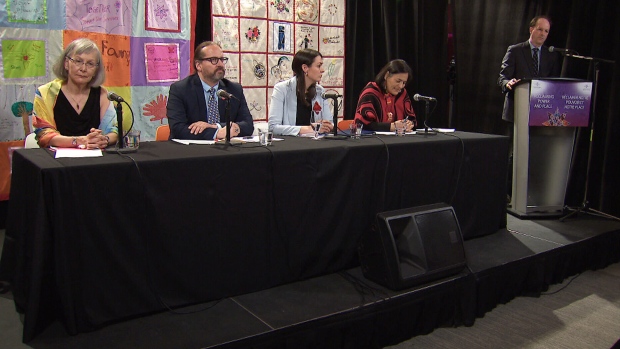 OTTAWA — Two years after the National Inquiry into Missing and Murdered Indigenous Women and Girls released its sweeping findings, a plan to move forward on its 231 calls to justice is finally being presented.

The plan, branded as the long-promised national action plan, is something of a preliminary, but comprehensive, framework developed by a large group of partners, including the families of victims and survivors, each of Canada’s distinct Indigenous groups as well as provincial, territorial and federal governments.

An advance draft copy of the document, obtained by The Canadian Press, acknowledges that it is mainly laying the foundation for more detailed and costed steps to come at a later date.

But it does include seven immediate next steps that all partners have agreed to prioritize to ensure the document becomes a foundation for a more comprehensive plan to address the detailed recommendations of the inquiry.

Funding for support services for survivors and family members is identified as the first immediate step as well as “adequate funding” to ensure the survivors and families can remain involved to provide insight and input into the national action plan’s next steps.

An oversight body will also be established to represent the interests of families, survivors and Indigenous communities. It will be empowered to investigate and address any complaints of violation of rights or other concerns as the work continues.

A public education campaign on the lived experiences of Indigenous people will also be created, aimed at challenging the acceptance and normalization of violence against First Nations women, girls and 2SLGBTQQIA+ people. This will include trauma-informed training for those who work with Indigenous people on topics such as history, culture, anti-racism, anti-sexism and anti-homophobia and transphobia.

A more in-depth implementation strategy for the plan will be developed later, with more specific information and additional medium and long-term priorities that all involved say they hope will lead to systemic change.

The plan — to be released later today in a virtual ceremony — does not include any dollar figures or funding commitments, but it does say funding, timelines and identifying who will be responsible for making each commitment happen will be among the next steps.

A Missing and Murdered Indigenous Women and Girls table will be struck to co-ordinate intergovernmental collaboration, and a data strategy is also already being developed to ensure more accurate and culturally sensitive data is available for decision-makers.

The data collected as part of this work will be protected by Indigenous data sovereignty to ensure First Nations, Metis and Inuit remain in control of and the stewards of their own information.

The draft document notes that even though this preliminary national action plan has been co-developed by a number of different partners, distinct plans or strategies developed individually by these partners — such as provinces or one particular Indigenous group — may not always be interconnected.

This means the priorities of the “core working group” members “may or may not concur with contributing partners’ plans or strategies in part or in whole,” the document states.

Earlier this week, the Native Women’s Association of Canada said it had walked away from working on this plan, citing a “fundamentally flawed” and politically motivated process to draft it.

Instead, NWAC released its own action plan, which, unlike the one being released today, has targeted measures with reporting mechanisms and costs attached.

On Tuesday, Crown-Indigenous Relations Minister Carolyn Bennett acknowledged the work of the Native Women’s Association as instrumental in pushing for the national inquiry to come to fruition.

“All of the work that they have done — we’re very grateful for that,” Bennett said.

Ultimately, she said the core group that was struck to lead the work has done an “extraordinary” job and will produce a plan that she says will be the “blueprint forward to move into that implementation phase with all the provinces and territories and all the distinctions-based governments and organizations.”

This report by The Canadian Press was first published June 3, 2021.