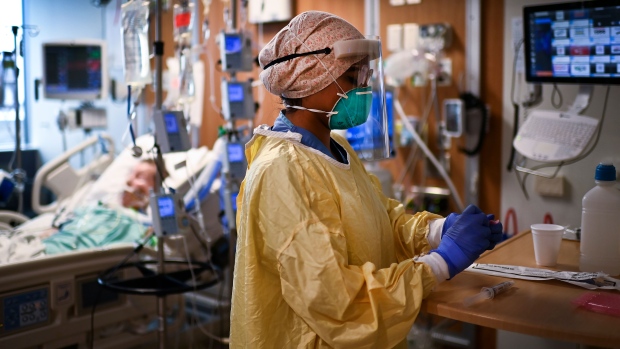 WINNIPEG — As the province continues to struggle through the third wave of COVID-19, some experts say it is time to start talking about a fourth wave of the pandemic.

Epidemiologist Cynthia Carr said a fourth wave of COVID-19 is not inevitable, but it is also not impossible.

Carr said if a fourth wave does hit, it could be during the fall. Fourth wave risk factors, Carr said, include low vaccine uptake, lifting public health restrictions too soon, and a new variant of concern that could evade the vaccine.

There is one variant of concern Dr. Anand Kumar, a Winnipeg intensive care and infectious disease specialist, has his eyes on.

“There is a distinct possibility that particularly the Indian variant, what’s called the Delta variant, has the possibility of substantially creating a fourth wave,” he said.

According to the province’s website, there have been seven cases of the Delta variant – also called the B.1.617.2 variant – in the province, including five cases in Winnipeg and two in the Southern Health region.

Kumar said one dose of the vaccine may not offer the same protection against the Delta variant.

“These new variants suggest we’re probably going to need more like 85 to 90 per cent penetration of vaccine uptake before the population is protected.”

Carr said the possibility of a fourth wave may also come down to vaccinations.

“The challenge and the recipe for failure here is pockets of highly interconnected people that are not vaccinated,” Carr said.

“It’s the pockets that will take us down because that will allow for a large group, or small, but they are interconnected with no barriers to that virus transmission. It will spread amongst that group and then all of those group members have other contacts.”

“It’s really hard to predict the future. I think at the present time we need to focus on where we’re at right now,” he said.

“We need to get our numbers down, we need to manage the third wave and get as many people vaccinated.”