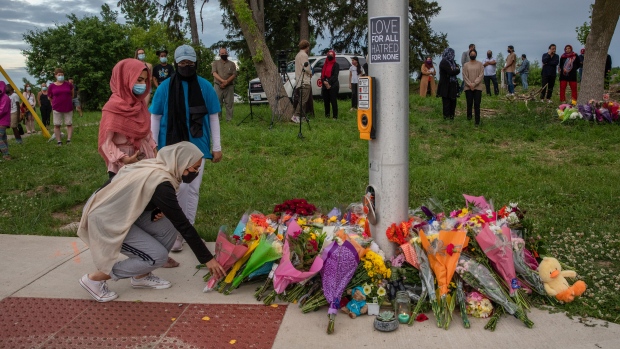 LONDON, ONT. — The four family members who were killed when they were hit by a vehicle in London, Ont., in what police say was an attack targeting them over their Muslim faith, have been identified.

A statement released to the media by a family spokesperson names the deceased as Salman Afzaal, his wife Madiha, their daughter Yumna and Salman’s mother.

Fayez Afzaal, 9, survived the attack. He “is on the road to recovery from serious injuries,” the statement reads.

Nathaniel Veltman, a 20-year-old London man, is charged with four counts of first-degree murder and one count of attempted murder in connection with Sunday’s attack. London police said Tuesday that they have been in contact with the RCMP and would not comment on whether further charges may be laid.

“While we understand the public’s desire for information, we are mindful that there are serious charges before the courts and that we must let the judicial process unfold,” they said in a statement.

Police allege that Veltman was driving a pickup truck that mounted a curb and hit the family, who were out for a walk. Police said Monday that they were not aware of any connections between Veltman and the Afzaal family, or any link between the suspect and organized hate groups.

A vigil for the Afzaals is scheduled to take place Tuesday night at the London Muslim Mosque, which the family attended, with distancing protocols observed due to the COVID-19 pandemic. Prime Minister Justin Trudeau and other federal party leaders will be in attendance.

Dozens visited the crash scene on Monday night to pay their own tributes to the family, many placing flowers and teddy bears in their memory.

The mayor of London, Ed Holder, told CTV’s Your Morning on Tuesday that the city is supporting its Muslim community in its grief.

“This kind of thing, you always imagine, happens somewhere else,” he said.

“This is the time when we’ve lost our innocence.”

FAMILY URGES ALL TO ‘STAND AGAINST HATE’

The family’s statement calls for everyone, from politicians to the public, to “stand against hate and Islamophobia” in favour of humanity.

“We need to understand that the destruction of a family in the brutal and horrific manner like this is something we must all stand against,” the statement reads.

Monday’s attack has been condemned by politicians across Canada and around the world, including Pakistan Prime Minister Imran Khan, who called it a sign of growing Islamophobia in Western countries. Friends say the Afzaals were well known within London’s Pakistani-Muslim community.

Samer Majzoub, president of the Canadian Muslim Forum, told CTV’s Your Morning on Tuesday that the attack should be considered domestic terrorism.

“We have to name it in order to be able to address it,” he said.

“Innocent people have just been killed for what they are, and still we are hesitant to call it what it is.”

Majzoub said that he has seen progress on fighting Islamophobia since the deadly 2017 shooting at a mosque in Quebec City, but that it has mainly come in the form of words, not actions.

“I do not deny that we have advanced in fighting hate and xenophobia, at least on the rhetoric side, but so far we haven’t seen … policies addressing [them],” he said.

With files from CTV News London and The Canadian Press