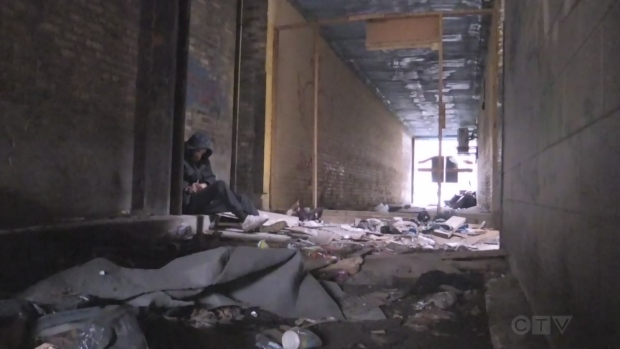 WINNIPEG — As an infectious diseases specialist, Dr. Carl Boodman has had a longtime interest in an illness that commonly afflicted soldiers during the First World War as well as people who now live in crowded refugee camps.

But Boodman had no idea when he encountered a case of trench fever in Winnipeg earlier this year that he’d soon be treating three more patients with the same condition and that all of them had spent time in a homeless shelter.

Trench fever is transmitted through the feces of body lice, which can be left on clothing and trigger an itchy reaction causing people to scratch their skin to the point that they end up with abrasions.

That is one of the signs of the misunderstood infectious disease, which could also cause fever, shin pain and a potentially fatal heart infection called endocarditis.

Those four cases this year are the only ones known to have occurred in Canada since the mid-1990s, said Boodman, who is also training in medical microbiology at the University of Manitoba.

However, cases may go undiagnosed because doctors are unlikely to be aware of what to look for and therefore don’t order specific lab tests to detect a bacterium called Bartonella quintana, which was first linked to the condition a century ago, he said.

Boodman, who is the lead author of an article highlighting trench fever in Monday’s edition of the Canadian Medical Association Journal, said the neglected and preventable disease of poverty is known to strike people who are homeless and have little access to medical care.

“It’s a disease associated with wartime conditions and refugee camps and it’s found in Canada. If we didn’t have this degree of poverty in Canada we wouldn’t have this disease,” he said.

People living in shelters may share clothing on which the dried feces of body lice can survive for weeks, Boodman said, adding there’s a public health need for access to laundry facilities and showers as well as affordable housing to prevent spread of disease in general among people who are underhoused across Canada.

He treated his first case of trench fever in February when a patient visited an emergency department in Winnipeg.

The 48-year-old man with shortness of breath and chest pain had repeatedly sought medical care in the previous year and a half for episodes of chest pain and body lice infestation, said Boodman of the patient who was in ICU and spent a month in hospital following heart surgery for endocarditis. He has since recovered.

About two weeks after starting to treat that patient, Boodman was so “baffled” when he saw a second patient with what appeared to be trench fever that he had the lab tests repeated twice before confirming the diagnosis.

He treated a third patient for the same disease at a different hospital about a month later, before a colleague mentioned a mysterious case involving a man who had endocarditis. Lab tests confirmed he, too, had trench fever.

“You don’t know anything about it for 20 years or so and then you have this succession of cases,” Boodman said, adding some patients may have the bacterium associated with body lice in their bloodstream for months and be asymptomatic for the disease that could become serious, requiring surgery to replace a heart valve.

A combination of antibiotics is often prescribed but there is debate on treatment of the disease, and its prevalence is unknown because it is not reported to public health officials in Canada and the United States, Boodman said.

Small studies from cases in the south of France and cities in the United States including Seattle and San Francisco have estimated that up to 20 per cent of homeless people with body lice could have been exposed to the bacterium that causes trench fever, Boodman said.

Dr. Stephen Hwang, who holds a research chair in homelessness, housing and health at St. Michael’s Hospital and the University of Toronto, said that while there is a need to recognize the rare but potentially deadly trench fever, other conditions such as skin infections, respiratory illnesses as well as poorly controlled diabetes and high blood pressure are common among underhoused populations.

Hwang treats homeless people in Toronto’s shelters and encampments once a week as a member of a group called the Inner City Health Associates, the largest such organization in Canada, with 100 physicians as well as nurses providing care to the underhoused in multiple locations including respite centres and hotels.

The aim is to provide better primary care to people who also experience more mental health and addictions issues, he said, adding secure housing is key to better health, especially as more families and seniors are becoming homeless.

“Without that stability it’s very difficult to deal with any of the acute or chronic conditions that they’re dealing with. We really do need to invest in creating affordable housing or else we’ll have to pay with the cost of the health consequences of that.”

This report by The Canadian Press was first published Dec. 7, 2020.