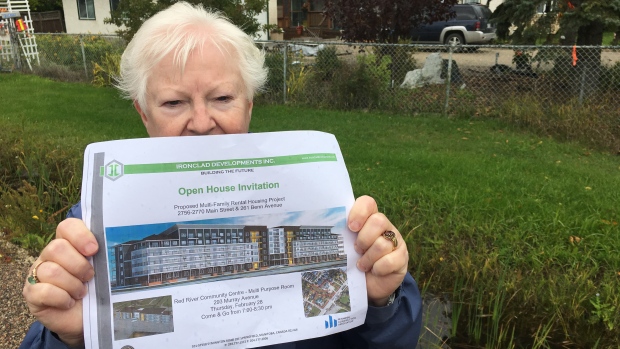 Families in a North Main neighbourhood are upset over a proposed apartment building and want the City of Winnipeg to have the developer make changes to the project.

The 154 unit building is slated for the corner of Main Street and Benn Avenue.

People living in the area said Sunday they learned about the development in February.

They’re concerned about everything from traffic, to privacy, to the value of their homes declining.

Mary Hill has lived on Benn Avenue for 35 years and is gathering signatures to fight the project.

“We are not unreasonable people. We would love to have new neighbours in the neighbourhood, but not at the expense of everyone else here,” said Hill.

If approved, Ironclad Developments Inc. said the building will have six stories facing Main Street and five next to the residential area.

Residents who oppose the project told CTV News the building is too big, stretching about a block long, and too high.

They said that it will create a shadow and reduce sunlight and balconies will limit privacy for people in their backyards.

Homeowners also expressed concerns about parking spilling on to residential streets, as Ironclad plans to rent underground and surface spaces, and there are worries about too much traffic.

“This road is already used by people north and west of here,” said Hill. “In the morning and in the evening in particular, there is really an overload of traffic”.

In a statement to CTV News, Ironclad described the building as place to live with, “high end finishes and a modern rental experience at rates in line with the local market”.

“Ironclad is excited about this project as it supports the city’s overall development plans and provides much needed additional housing options for the citizens of Winnipeg,” the statement went on to say.

“We do not anticipate any issues with traffic or privacy.”

City Councillor Jeff Browaty said he doesn’t believe the project will impact the value of homes. Given the way Winnipeg is growing, he said the location makes sense.

“We’re growing out, but also growing up. This is the type of density and this is the place to have it. Streets like Main Street have capacity for this type of traffic. We’re not too far from transit services,” said Browaty.

Residents opposing the project want the city to make it so that the entrance and exit to the building is off Main Street, not Benn Avenue, and don’t want the building to be any higher than two or three stories.

Browaty said the land for the project has been rezoned, and there is a pending appeal about moving the building closer to Main Street.

If approved, the developer said construction is scheduled to begin in late 2020 and would be completed in early 2022.