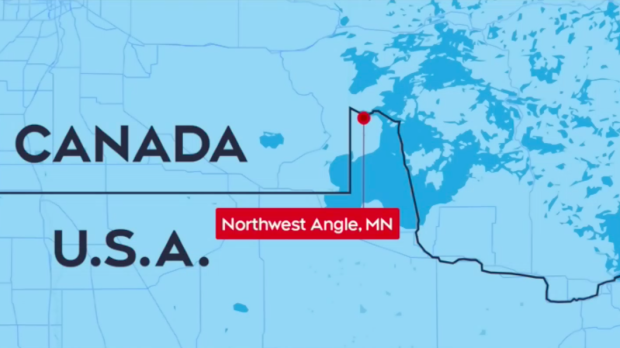 TORONTO — Although the pandemic has cut most of us off from our regular lives, a remote community in Minnesota was cut off more than most — those in Northwest Angle, Minn. weren’t able to travel by land to the U.S. because they’d have to drive through Manitoba.

Northwest Angle is a U.S. exclave, existing north of the Canada-U.S. border right in between Ontario and Manitoba on the coast of Lake of the Woods. Caused by a surveying mistake when borders were being drawn up, all of the Northwest Angle’s land borders are with Canada, meaning that during the pandemic, due to border closures, the residents there were cut off from their own country.

“We’re under house arrest,” Paul Colson told CTV News Channel on Sunday. “If we’re going to leave our little exclave here at the Northwest Angle, we have to ask Canada permission to leave, how long we can go, how long we’ll be gone. We’re not allowed visitors.

“If we want to leave we gotta jump through a bunch of hoops.”

On May 21, the Public Health Agency of Canada announced that “to address unique situations along the Canada-U.S. border, residents of Alaska who transit through Yukon by car to get to another part of Alaska, and residents of Northwest Angle, Minnesota, travelling by car through Canada to mainland U.S., will be exempt from pre- and post-arrival testing.”

Karen and Paul Colson run Jake’s Northwest Angle Resort, and their business has plummeted since the pandemic started.

“We should be open right now, and we — we’re not, really open. We’re empty,” Karen said.

“As far as operating our resort, March 20 of last year, the border closed, so we’ve been in this state for 15 months now,” Paul Colson said. “And I would say that our business is down around 75 per cent.”

He explained that they’d had a slight uptick in the winter, when they’d been offering ice fishing on the lake. But they estimate that last summer their business was down by 82 to 85 per cent.

While many businesses have suffered due to the pandemic, their resort was doubly affected because with the border closure previously in effect, both Canadian and American customers largely could not make the trip to the resort.

“If you choose not to drive through Manitoba [to get to the resort], you can take a 50 mile [80 km] boat ride,” Colson said. “And that would be like going across the Great Lakes there if you wanted to head over down to Niagara or something from Toronto.”

The Colsons thought of a solution, but said there needs to be enough political will to get it to happen.

“What we want is a no-contact travel corridor to go through 40 miles [64 km] of southeast Manitoba,” Colson said. “So we could come and go to our own country. It wouldn’t be hard to do.”

If Americans were permitted to travel by land in a specific corridor from the Minnesota border to Northwest Angle, through Manitoba, this would allow the Colsons to receive more guests at their resort. It would also allow them to leave themselves in order to travel in the U.S. if they chose.

This story has been updated with a May 21, 2021 statement from the Public Health Agency of Canada stating that residents of Northwest Angle, Minnesota, travelling by car through Canada to mainland U.S., will be exempt from pre- and post-arrival testing.