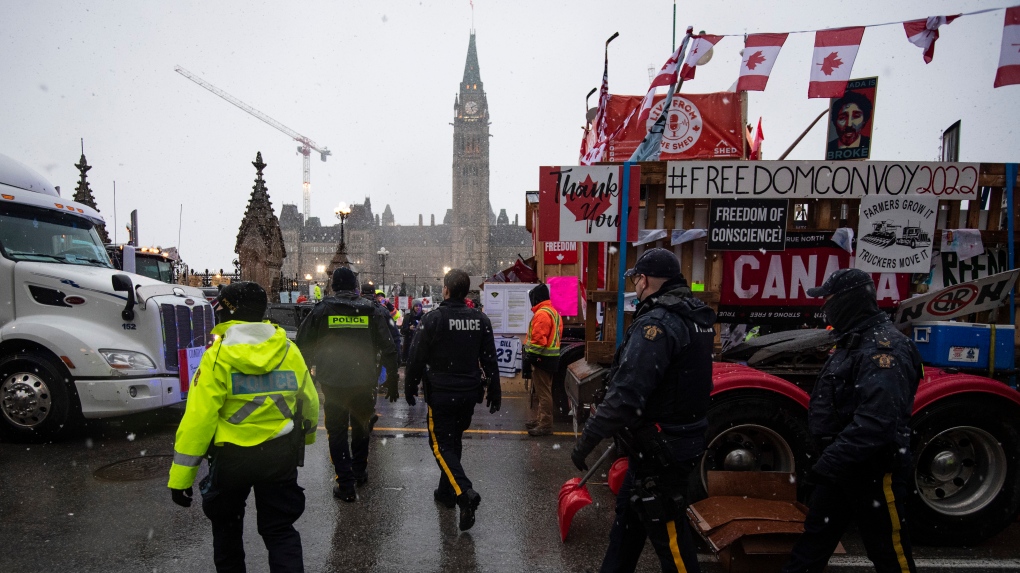 Less than one week into the Public Order Emergency Commission’s hearings examining the federal government’s invocation of the Emergencies Act, hundreds of documents have already been made public.

While a considerable portion of the documents provided to the commission so far are copies of pandemic public health orders and statements, as well as clippings from media coverage of the “Freedom Convoy,” there have also been transcripts or summaries of high-level phone calls, email and text message exchanges, and internal reports, with likely much more to come.

The pieces of evidence submitted so far have shed new light on some of the internal machinations within, and between various levels of government and police forces in preparing for, and responding to the protests.

Here’s a rundown of some notable information gleaned from the documents to date.

According to a summary report of a call between federal, provincial, and City of Ottawa officials on Feb. 6—midway through the “Freedom Convoy” protests — the Canadian Security Intelligence Service (CSIS) voiced concerns about the protests potentially being used as a “recruiting ground.”

“There are some individuals from other causes who are the hardened elements who will likely use violence but they see this as not their mission… They are not actively participating or organizing it and are likely using this as a recruiting ground,” reads the document.

Vigneault also noted that at that point, the protest was “primarily a domestic issue” and said that despite concerns to the contrary, CSIS was not seeing a major organization of U.S. truckers coming across, nor were there foreign actors identified as financing the convoy. A separate Ottawa Police Service (OPS) document from a week later seemed to contradict this, indicating international “money and supports” had been identified.

On this call, the key group of emergency response officials also discussed how at that point the number of trucks in the capital was “significantly lower than the peak,” but flagged that while some encampments were “contained” there was concern that the Rideau Street section of trucks blocking the area was being led by “well-organized” “bad actors.”

As well, Prime Minister Justin Trudeau’s National Security Adviser Jody Thomas spoke about negotiations at the Confederation Park encampment that she viewed as “a win of avoiding ‘guns pointed'” in the park. There was also discussion on this call about a potential “interlocutor” to help continue negotiations with the protest organizers, with former senator Murray Sinclair, ambassador and former politician Bob Rae, and former Supreme Court justice Louise Arbour’s names mentioned.

Amid all of this, Sloly seemed to suggest, per the summary report, that at this stage he was not interested in pursuing “mass arrests,” citing the 2010 G20 summit protest experience and the “legal and human rights implication.”

Confidential minutes from a Feb. 5 Ottawa Police Services Board meeting revealed that, at that point in the protests, OPS was cautious about pursuing mass arrests of the anti-COVID-19 mandate and anti-government protesters, saying that all scenarios being run through were “high risk.”

This was because the service’s intelligence “suggested that [sic] some participants, being arrested, injured or even being killed was viewed as achieving a level of martyrdom rather than a deterrent.”

There was also some indication that “fractures” were developing between the various groups protesting, with Sloly suggesting the OPS could try to “leverage” that.

“Chief Sloly raised the need for more levels of government to become involved in the unprecedented demonstrations. He noted that the demonstrators are not of one single agenda, and they are a well-organized and funded group,” reads another portion of the minutes.

The minutes also note that OPS had brought in a mental health specialist who was helping liaison with teams on the ground, “acting as a crisis management negotiator.”

Over multiple documents submitted to the commission, it is made evident that both city and federal government officials were frustrated by what they saw as lacking involvement of the Ontario government as the protests continued.

In addition to the notable exchange between Ottawa Mayor Jim Watson and Trudeau in which the prime minister thought Ontario Premier Doug Ford was “hiding from his responsibility on it for political reasons,” there are other examples of key players questioning where the province was.

On Feb. 8, according to screenshots provided to the commission—just a few days before Ontario declared a state of emergency—the two were discussing whether there were any indications that the province was willing to join a tri-partite table to talk about the situation.

“Not yet,” Astravas said early that morning. When Arpin followed up around 3 p.m. to see if the situation had changed, Astravas said then-Ontario solicitor general Sylvia Jones was a “hard no” and that she had received “zero response” from officials.

She then discussed how they could strategize to get the province at the table.

In separate evidence, according to a letter Jones sent to Watson and then-Ottawa Police Services Board chair Dianne Deans in response to a request for additional police support, Jones wrote that she had passed along their request to the OPP.

While vowing that her ministry was “committed to supporting our policing partners,” she wrote that from the political level, the government would continue “encouraging all those participating in the Ottawa protests to govern their actions in a way to ensure they are peaceful.”

WEEKEND 1: ‘OBJECTIVE TO KEEP THE PEACE’

While there has been a range of accounts and documents indicating differing perspectives on how seriously intelligence on how many truckers were coming to protest and for how long they planned to stay was taken, one thing is clear: Sloly seemed confident in the initial police response.

Despite indications that had OPS blocked off vehicle access to key downtown streets, the protesters wouldn’t have been able to become cemented in the downtown core, in a summary of a Jan. 31 meeting with the mayor, Sloly indicated that the police efforts had been “massively successful.”

In the same note, however, Sloly flagged that the protests were “transitioning from demonstration to occupation despite negotiations.”

One day earlier, according to an email exchange entered into evidence, after Ottawa General Manager of Emergency and Protective Services Kim Ayotte provided an update to city council on how the first full day of convoy protests was going, councillor Shawn Menard asked whether the city was going to be ticketing and towing vehicles.

Ayotte said his opinion was that police were doing a “great job at maintaining the fine balance between a peaceful demonstration and a potential riot.” He also suggested intervention could be a “tipping point.”

Chiming in, Kanellakos indicated he agreed, asking “where would we put the vehicles that are towed??? The objective is to keep the peace.”

‘WISH WE HAD THE POWER’ TO DO MORE THAN WATCH

An email thread in which Somerset Ward city councillor Catherine McKenney expressed frustration over the “complete absence of police” on certain streets within her ward midway through the protests indicated that some councillors were feeling both powerless, and sympathetic.

After sharing a response from Ottawa police that indicated they had 20-25 officers patrolling Centretown over the Feb. 4-6 weekend of protests—in addition to an unspecified additional cadre of backup from other forces—McKenney balked that a friend had reported not seeing any visible police while on a walkabout one night.

Here’s how council colleague and then- member of the Ottawa Police Services Board Carol Anne Meehan responded: “So very sorry Catherine. Wish we had the power to do something, besides watch.”

Those looped in on this exchange included a mix of City of Ottawa officials and councillors, then –chief Sloly, as well as Ottawa Centre MP Yasir Naqvi and Public Safety Minister Marco Mendicino.

Councillor Mathieu Fleury then chimed in, adding Ottawa Vanier MP Mona Fortier to the thread and said: “No police in ByWard Market/Rideau either,” linking to coverage from CTV News.

One last tidbit worth noting—particularly for Ottawa residents— is that ahead of the convoy rolling into town, city officials were discussing allowing the Ottawa Baseball Stadium parking lot on Coventry Road to be used as a parking zone for the incoming transport trucks.

Of course, this area ended up becoming a stronghold for convoy protesters; set up as a supply camp and closed off to outsiders. But before this lot became an encampment, the city had suggested “if Wellington gets too congested, they would ask vehicles to stage there and participants would be able to take transit downtown.”

Framed as “overflow” for that first weekend, one city official said the parking lot was “ideal” because protesters would then be a “quick” light rail ride into the downtown core. There was no mention in the email thread that a mask mandate —the kind of public health restriction that truckers and their supporters came to town to protest against— was in effect on Ottawa’s LRT at the time.

With files from CTV News’ Annie Bergeron-Oliver and Mackenzie Gray

(30104)
$45.00 (as of December 7, 2022 02:28 GMT -06:00 - More infoProduct prices and availability are accurate as of the date/time indicated and are subject to change. Any price and availability information displayed on [relevant Amazon Site(s), as applicable] at the time of purchase will apply to the purchase of this product.)

(4103)
$18.99 (as of December 7, 2022 02:28 GMT -06:00 - More infoProduct prices and availability are accurate as of the date/time indicated and are subject to change. Any price and availability information displayed on [relevant Amazon Site(s), as applicable] at the time of purchase will apply to the purchase of this product.)

(12070)
$4.92 (as of December 7, 2022 02:28 GMT -06:00 - More infoProduct prices and availability are accurate as of the date/time indicated and are subject to change. Any price and availability information displayed on [relevant Amazon Site(s), as applicable] at the time of purchase will apply to the purchase of this product.)

(9460)
$59.99 (as of December 7, 2022 02:28 GMT -06:00 - More infoProduct prices and availability are accurate as of the date/time indicated and are subject to change. Any price and availability information displayed on [relevant Amazon Site(s), as applicable] at the time of purchase will apply to the purchase of this product.)

(410305)
$27.74 (as of December 7, 2022 02:28 GMT -06:00 - More infoProduct prices and availability are accurate as of the date/time indicated and are subject to change. Any price and availability information displayed on [relevant Amazon Site(s), as applicable] at the time of purchase will apply to the purchase of this product.)