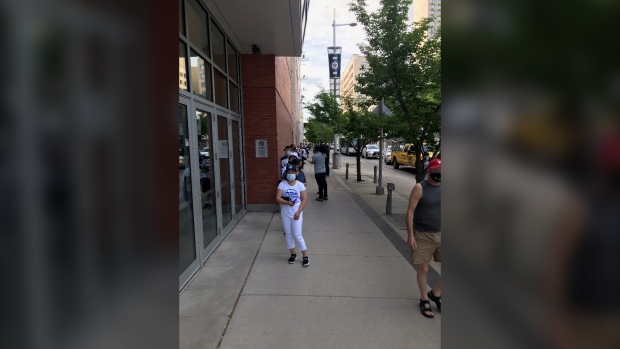 WINNIPEG — A Manitoba health official said allowing some fully vaccinated health-care workers at Winnipeg Jets playoff games is a way for the province to show its appreciation.

“This is a tiny token of gratitude compared to the monumental effort that health-care workers have put in the last year and a half,” said Dr. Joss Reimer, medical lead for Manitoba’s Vaccine Implementation Task Force, at a news conference on Wednesday.

Under Manitoba’s latest round of public health orders, the rules allow for no more than 500 fully vaccinated health-care workers at a playoff game. The order also notes that immediate family members of the Winnipeg Jets’ players, coaches, managers, and administration officials may attend as well.

Reimer said Public Health was involved in the decision to allow the health-care workers at the games.

“A lot of careful planning has gone into making sure that the protections at the game don’t put anyone at risk of having the virus spread in that setting,” she said.

“They’re keeping the numbers very low, people will be required to wear masks the entire time, and everyone in attendance will have received two doses of the vaccine, with the second dose being at least 14 days ago.”

Reimer said this is a way for the province to say thank you to the health-care workers, who have been on the frontlines of the pandemic since it started.

“While we’re telling most Manitobans to stay home, that’s not the message we give to the health-care workers. We’re asking them to come in and put themselves in front of this virus every single day,” she said.

The Winnipeg Jets face the Montreal Canadiens on Wednesday in Game 1 of the playoff series. The game begins at 6:30 p.m.