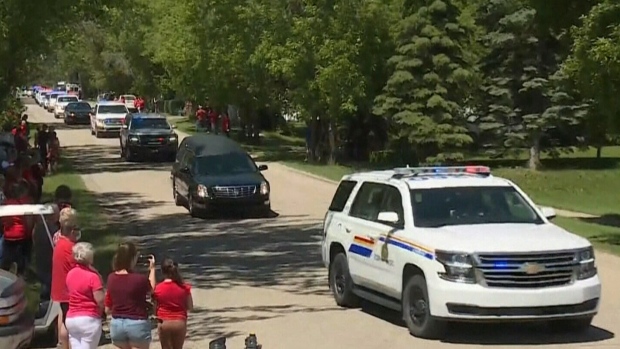 WINNIPEG — A Winnipeg man charged with manslaughter in the death of a Saskatchewan RCMP officer has a previous conviction from more than a decade ago for a break enter at the home of a Manitoba Crown attorney, according to court records and transcripts.

Alphonse Stanley Traverse, 41, pleaded guilty to the offence in 2009 and was sentenced to just over four and a half years for his role in the home invasion.

According to court transcripts from Traverse’s sentencing, he was one of four people who went to the home in a stolen red van on the morning of Mar. 31, 2007. Court heard four intruders broke into a home owned by the Crown attorney, but were chased off and fled.

In the ruling, Court of Queen’s Bench Justice Robert Cummings told the court there was nothing connecting the incident to the Crown attorney’s job. However, court heard the previous day the Crown attorney had been threatened by an accused.

Traverse, and Marlene Velma Louise Pagee, 42, both of Winnipeg have been charged with manslaughter in the death of Const. Shelby Patton, 26, Saturday in Wolseley, Sask. Traverse and Pagee have also been charged with failing to stop at the scene of an accident resulting in death, theft of a motor vehicle and breaching court orders.

According to court records, Pagee received a fine after pleading guilty back in 2006 to flight from police, possession of a stolen vehicle and impaired driving.

Both Traverse and Pagee appeared in court in Regina on Monday. None of the offences they’ve been charged with in Patton’s death have been tested in court and they’re presumed innocent.

Patton was killed while on duty June 12 in the town of Wolseley. The RCMP said he was hit while outside his cruiser by a suspected stolen truck after initiating a traffic stop just before 8 a.m.

Around two hours after Patton was hit, the RCMP in Saskatchewan said police arrested two suspects near Francis, Sask.

On Tuesday in the town where Patton was killed, residents – many dressed in red – lined the streets as the officer’s body was transported to a funeral home.

In Winnipeg, there’s been a memorial set up by Kris Buschau-Lapointe for Patton outside RCMP headquarters over the past two days.

“This is just to really show support that Manitoba is behind their loss of officer Patton,” Buschau-Lapointe said.

Buschau-Lapointe’s been collecting signatures on a card of condolences she hopes to send to Patton’s family.

The two accused in Const. Patton’s death are expected back in court later this month.