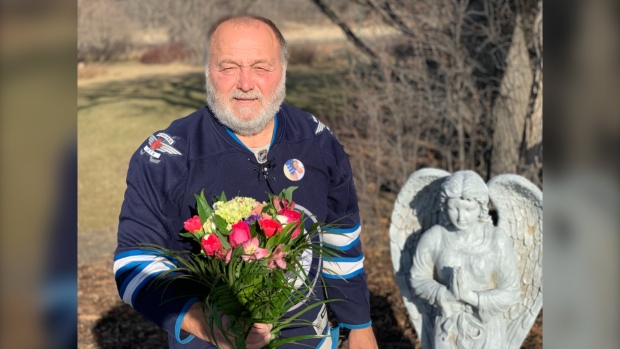 WINNIPEG — A Winnipeg man has been trying to make random strangers’ days a little better by handing out flowers.

Kim Morfoot said he has been making the gesture in memory of his wife, who passed away.

“This week I have given away about 30 bouquets.”

Spreading joy to strangers, said Morfoot, is a way for him to deal with the heartache of losing his wife.

On Wednesday, a woman by the name of Carrie was lucky enough to receive a bouquet from Morfoot, and was completely surprised by the gesture.

“They are amazing and they smell great,” she said.

Morfoot said he met his wife at Maple Grove Park when he was 16-years-old and she was 15.

“We had a special connection,” Morfoot said.

He has set up a bench in the area in her memory, and says he goes there just to sit in the same spot where they met.

“It’s so peaceful sitting here. It’s so calming. We were like one together.”

He said his wife was such a happy person and that he misses her, a lot.

“She treated everybody the same.”

Morfoot said he will continue to give out flowers in honour of his late wife until the day he dies.

– With files from CTV’s Jamie Dowsett