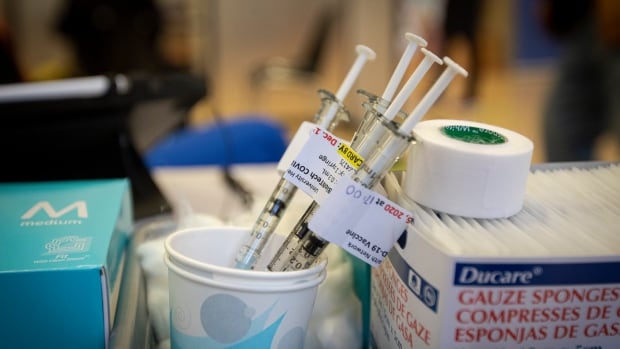 Manitoba is expanding age eligibility for COVID-19 vaccines to anyone 45 and older at 11:45 a.m. Wednesday.

Those Manitobans can book an appointment at an immunization supersite or pop-up clinic.

The news comes shortly after Health Canada approved the use of the Pfizer-BioNTech vaccine for children age 12 to 15. It was already approved for 16 and older.

Johanu Botha, co-lead of the vaccine implementation task force, said Manitoba is still reviewing the approval, but if they decide to vaccinate children, everyone in Manitoba age 12 and up should be eligible by May 21 to book an appointment.

“The question will be on when to fit them in,” Botha said during a Wednesday vaccine technical briefing. “If we do see lower take-up or hesitancy, then there is a small chance we may be able to open it up even earlier.”

Manitoba will expand age eligibility on Mondays, Wednesdays and Fridays.

The second dose campaign is expected to be done by the end of July.

Botha also said a new supersite will open in Gimli, at the recreation centre at 45 Centennial Rd., in late May.

CBC Manitoba will live stream a news conference with the vaccine rollout team at 12:30 p.m., here and on Facebook, Twitter and CBC Gem.

Dr. Joss Reimer, medical lead of the vaccine implementation task force, will join Botha, who is head of operations.

Manitoba’s vaccine rollout has undergone a series of changes in recent weeks that have both expanded eligibility generally and targeted some high-risk populations in particular.

On Tuesday, the province announced a final group of high-risk areas where everyone 18 and older now qualifies.

As eligibility expands, Manitoba continues to see its COVID-19 outlook worsen, with daily case counts and hospital numbers rising amid the third wave of the pandemic in the province.

The number of COVID-19 patients in Manitoba intensive care wards has doubled in eight weeks and is now rising at such a rate that hospitals may soon contend with volumes so far unseen in the pandemic, doctors warned on Tuesday.

The number of COVID-19 patients in ICUs started to rise more rapidly late last month, as some of the thousands of Manitobans battling the disease became more acutely ill.

At the current rate, hospitals could become overwhelmed with COVID patients within weeks, say the 212 signatories on a letter sent to Premier Brian Pallister Tuesday evening, calling on his government to enact more restrictions.

The doctors also called for financial support for shuttered businesses and sidelined workers, including paid sick leave and vaccination leave.

As well, they want to see immediate vaccination eligibility for all Manitoba teachers, school staff and child-care workers.

Asked Wednesday whether there are plans to extend eligibility to school workers, Botha deferred to Reimer, who will be at the news conference at 12:30 p.m.